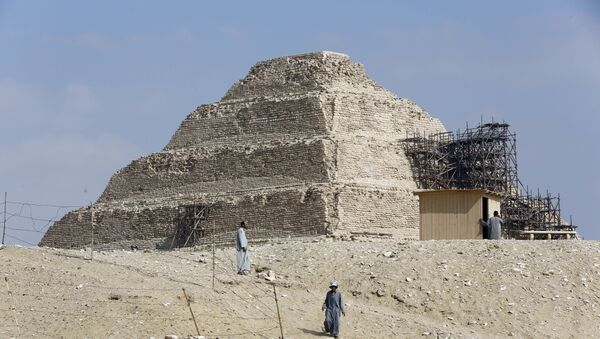 Egyptian authorities announced on Sunday the discovery of 13 intact and sealed coffins in the desert necropolis of Saqqara in Egypt.

According to Egypt’s Ministry of Tourism and Antiquities, the coffins were unearthed in a burial shaft 36 feet below the ground’s surface. The wooden coffins, found stacked on top of each other, date back to 2,500 years ago.

Experts analyzing the sarcophagi have determined that they have remained sealed since they were first entombed. The coffins are so well preserved that some of the original coloration on their exteriors remains intact.

Egypt’s Tourism and Antiquities Minister Khaled El-Anani also revealed that three sealed niches were found inside the burial shaft, and according to Science Alert, he said that there are likely more coffins to be discovered inside the shaft. At present, the names and identities of those buried in the coffins remain unknown.

“An indescribable feeling when you witness a new archaeological discovery,” Anani tweeted Sunday along with a video offering a sneak peek of the discovery.

Saqqara has long been of interest to archaeologists, since it is believed to have been the necropolis for Memphis, which was once the capital city of Egypt. Archaeologists believe that Egyptians entombed their dead in Saqqara for 3,000 years.

The burial ground is located around 19 miles south of the modern Egyptian capital city of Cairo and was classified as a UNESCO World Heritage Site in 1979.