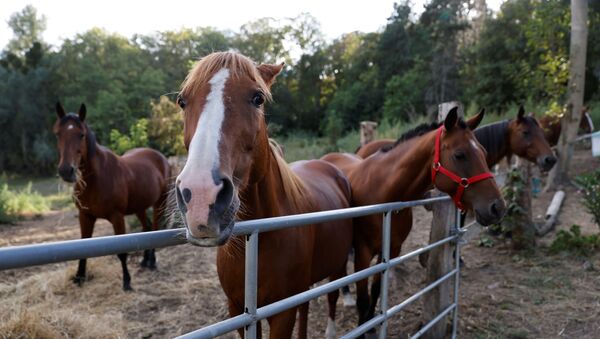 MOSCOW (Sputnik) - The French police briefly detained a suspect in a probe looking into the mysterious killings and mutilations of horses that have been detected across France in recent months, the French BFMTV broadcaster reported on Tuesday.

The media outlet said a 50-year-old man was taken into police custody on Monday evening following the publication of a composite portrait of a possible perpetrator responsible for the abusive acts on horses. The portrait was drafted based on the testimony of an owner of a horse ranch in the central department of Yonne. He was attacked by two men who had mutilated his ponies and a horse at the end of August.

The investigators checked the house and phone lines of the detainee and concluded that he had not been in Yonne when the ranch owner was attacked. However, the media outlet added, he has not been removed from the suspect list.

"We always have people who attack horses in the meadows, the feeling of insecurity therefore still exists. The perpetrators are still running", Jean-Luc Vernon, member of the board of the French Equestrian Federation, told the BFMTV broadcaster.

Police divisions across the country have opened 153 probes into reported cases and the authorities called on horse owners to be vigilant regarding the situation, but asked them to refrain from "taking the law into their own hands".

The police are currently at a loss as to the identities of the perpetrators, assuming their motives to be the result of an internet challenge or a satanic ritual.