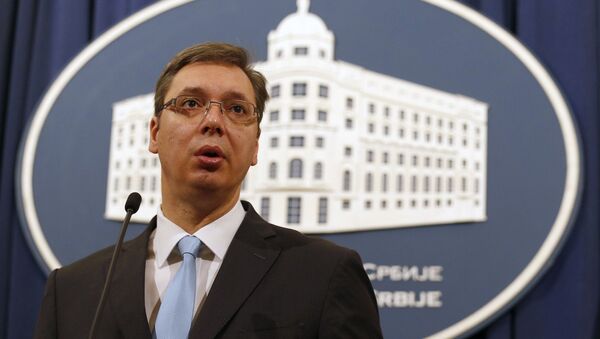 © East News / AP Photo/Darko Vojinovic
Subscribe
Lilia Dergacheva
All materialsWrite to the author
President Donald Trump and his Serbian counterpart Aleksandar Vucic met in the White House on Friday to negotiate a US-brokered deal meant to normalise economic ties between Serbia and Kosovo, which declared independence in 2008 and is recognised by most of the Western world, but not Serbia and its allies Russia and China.

Serbian President Aleksandar Vucic has busted spiralling social media speculation that he was "unaware" that the agreement he signed in the Oval Office included a provision on a transfer of his country’s embassy to Jerusalem in July 2021.

“I’ve heard so much about this. They say: ‘Look at Vucic’s reaction  - he hasn’t even read the agreement’. Do those people know that prior to that, I spent a whole day and a whole night checking every single word 500 times?” Vucic told a press conference in Brussels.

He went on, fuming:

“All of those combined didn’t know as much as I did alone about the first and the second agreements and their differences”.

Vucic said he simply needed to check again so as not to sign a different (Albanian) agreement and to make sure the document hadn’t been substituted with something else when signing.

Speculation mounted online the other day over Serbian President Aleksandar Vucic allegedly being bemused on Friday when US President Donald Trump announced in the Oval Office that his country had committed to opening an embassy in Jerusalem next year.

Footage of the signing ceremony showed Trump announcing that the embassy transfer would take place in July, prompting Vucic, sitting on POTUS’ right, to leaf through the agreement he had just signed, and then cast a glance to his right, before touching his forehead and hair.

Many mockingly claimed that Vucic was in the dark about what he had just signed on to.

“Look at the Serbian president now, anyone sees issue [sic] with this sitting behind that small desk like first grader”, one wrote cheekily, with another laughing it all off as “a priceless expression”.

“Just look at the way Trump received the President of Serbia at the White House, it's like an employee facing a boss”, a third pointed out.

The agreement came as part of a US-brokered deal to establish full-fledged economic ties between Serbia and Kosovo - something that will also see the latter recognise Israel and its territorial claims. The US did so in late 2017 and moved its embassy to Jerusalem in May 2018, prompting its partners and allies to do the same, despite widespread opposition to the move as the Israeli-Palestinian conflict remains unresolved.

“Truly, it is historic”, Trump lauded the effort, alongside the Serbian president and the Kosovo prime minister, in the Oval Office. “I look forward to going to both countries in the not too distant future”, POTUS added.