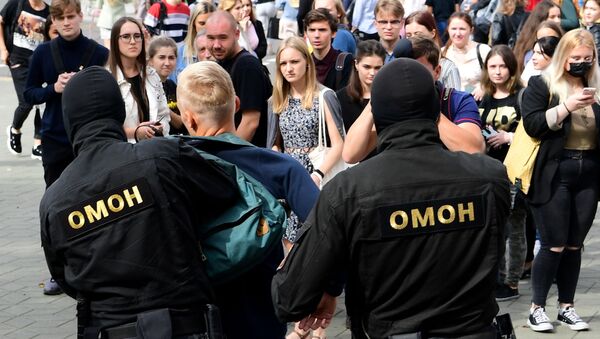 Belarus has been engulfed by protests for almost a month in the wake of the highly-contested presidential election results that saw Alexander Lukashenko re-elected for a sixth term. The Interior Ministry has repeatedly called on citizens not to take part in unauthorised mass demonstrations.

The Belarusian police are beefing up security measures in Minsk ahead of a planned opposition protest that is expected later in the day.

The Interior Ministry said in a press release that additional police, army personnel, and vehicles will be deployed to the streets. The press release adds that some of the city's avenues will be cordoned off during the day.

The Interior Ministry reminded citizens that the protests are unauthorised and the police will take all the necessary measures to suppress any violation of public order.

The opposition rally is set to begin at 2 p.m. local time (11:00 GMT) in October Square. The Palace of the Republic is located in the square, while the residence of Belarusian President Alexander Lukashenko is nearby.

Belarus has been rocked by large-scale protests since the 9 August election, which saw Lukashenko re-elected for a sixth term. The opposition rejected the outcome, claiming that Svetlana Tikhanovskaya won the election.

"As for my servicemen and employees, 30 of them were seriously injured and are still in hospitals. We will not abandon them, we will treat them, the maximum moral, material and financial assistance will be provided", Belarusian Interior Minister Yuri Karayev said.

Since the start of the opposition protests across Belarus, more than 130 law enforcement officers have been injured.

"As for the use of force, I will say it is possible, of course, no one excludes that these people have not yet run out of fervour. Let them try - riot police, internal troops are in place" ,Belarusian Interior Minister Yuri Karayev said.

The minister added that the security forces would not hesitate to respond to violence, noting that they do not intend to provoke it.

"Hundreds of citizens have been arrested across the country for taking part in unauthorised protests. We do not know the final number, we are planning to present it on Monday morning," Interior Ministry spokeswoman Olga Chemodanova said.

MOSCOW (Sputnik) - Law enforcement officers have detained several participants of protests near the residence of Belarusian President Alexander Lukashenko in Minsk, a Sputnik correspondent reported from the scene on Sunday, adding that security forces are pushing the crowd back from the building.

Protesters were on their way to a nearby park when about 10 minibuses without licenсe plates and buses with riot police drove to Independence Avenue.

As a result, at least 10 people out of those in the park were detained and taken to police vans. The detentions are still ongoing.

According to a Sputnik correspondent, protesters in Minsk marched toward the Independence Palace, which serves as the presidential residence, carrying white-red-white flags, which have become a symbol of anti-government protests, chanting slogans. The country's security services were preparing barriers along the crowd's route.

Later, protesters arrived at the riot police and internal troops roadblock outside of the Victoria hotel, near the palace. Neither protesters nor law enforcement officers are making any moves.

Meanwhile, A1 telecommunication provider announced it had to lower mobile internet bandwidth in Minsk on orders from authorities.

"Per the order from state authorities, we have lowered bandwidth of mobile internet in Minsk's territory. Compliance with the order results in lowered quality of the data transmission service or its temporary unavailability," the provider tweeted. 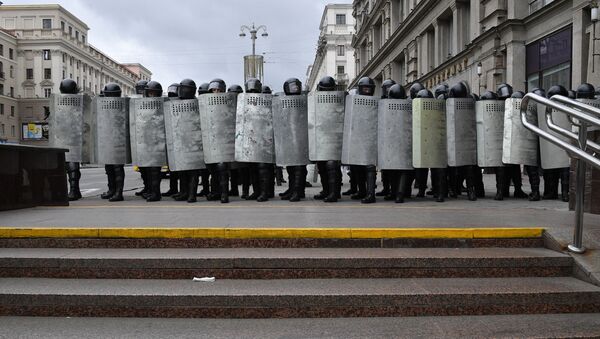 © Sputnik
/
Go to the photo bank 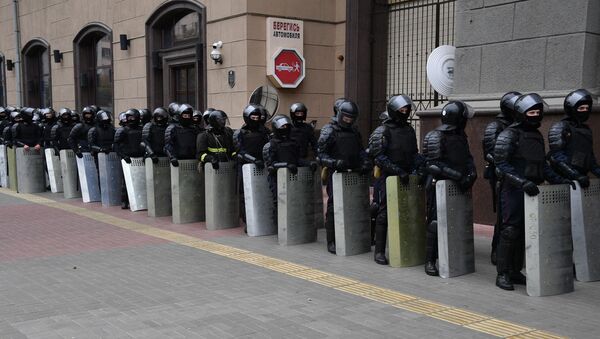 According to the ministry, some minor protests are also being held in other regions of Belarus.

MINSK (Sputnik) - Belarusian police arrested 91 people during protests in the country on Saturday, and 34 of them remain in temporary detention facilities, the Interior Ministry said on Sunday.

"In total, 91 people were detained yesterday for violating the law on mass gatherings. A total of 34 people were placed in temporary detention facilities until a court can consider their cases," the ministry said in the official Telegram channel.

The ministry also said that approximately 4,000 people participated in opposition rallies across the country on Saturday.