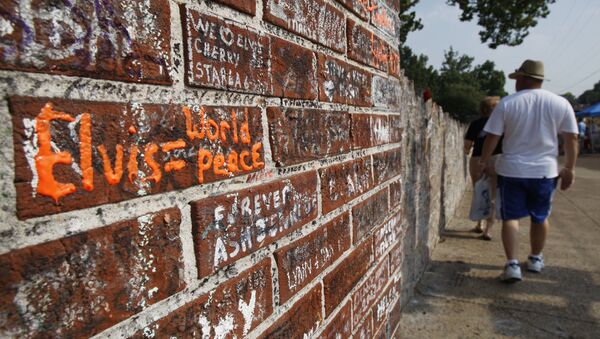 Two iconic landmarks linked to the King, his home in Memphis, Tennessee and the stage where he gave his first paid concert, were found vandalised on Tuesday.

Vandals have targeted Elvis Presley’s Graceland estate with sometimes profane graffiti in support of the Black Lives Matter movement and calls to defund the police.

The walls and sidewalk outside Graceland were covered in messages including “#BLM”, “Defund the Police”, “Abolish ICE” (Immigration and Customs Enforcement) and “#Stay Tuned”.

The slogans, painted in thick black, red and orange letters, covered up hundreds of handwritten tributes to Elvis his fans had left on the walls of Graceland. Fox 13 reports that police estimate the cost of repairs at $150,000.

Crews are cleaning up after someone spray painted the walls of Graceland with messages like “Defund MPD” “Arrest Breonna Taylor’s murderers” and “BLM” and more. I’ll give you a live look on @FOX13Memphis midday. pic.twitter.com/iggrafPLb8

​“Graceland has no comment,” a spokesperson for the estate, where Elvis lived for 20 years until his death in 1977, said in a statement.

Bill Stanley, Elvis’ stepbrother, said he was appalled that someone would deface the King’s home.

“This is totally uncalled for,” Stanley complained. “One of the saddest days of my life. I mean, besides the day that Elvis passed away, this right here is right up next to it.”

Another Memphis landmark that was vandalised this week was the Levitt Shell amphitheatre, where Elvis performed his first rock and roll show in 1954. Among the slogans were “Defund MPD” (Memphis Police Department), “Eat the Rich”, “F**k Trump” and “F**k (Mayor) Strickland”.

Here are some of the photos I just took of the graffiti at the Levitt Shell. pic.twitter.com/CO3zkukcbG

​A spokesperson for the Levitt Shell told local media this was the sixth time this year the landmark had been vandalised.

“That’s why this is such a devastating situation seeing it this morning,” said Levitt Shell executive director Natalie Wilson. “It’s getting worse.”

She added that defacing the stage was “not appropriate” and expressed hope that conversations in the community “are deeper, they’re more productive and that change happens with good communication”.

According to The Commercial Appeal, vandals also tagged the popular “I Love Memphis” mural on Cooper Avenue outside of the Memphis Made Brewing brewery. The graffiti were similar to those left at Graceland and Levit Shell: “Eat the Rich”, “BLM”, and “F**k the DA” (District Attorney).