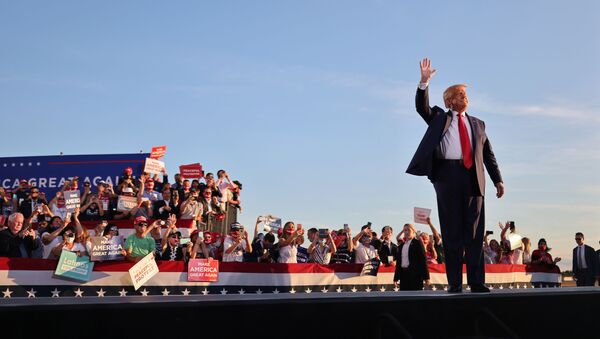 James Tweedie
All materialsWrite to the author
Previous polls have put Democratic candidate Joe Biden in the lead, but the new results show Donald Trump scoring heavily among "shy voters" who hide their intentions from Pollsters. The poll predicted a big victory for Trump in a repeat of the 2016 election which Hillary was hotly tipped to win.

US President Donald Trump has hailed a new poll giving him a clear lead over Democratic rival Joe Biden in November's election.

The poll, conducted by transatlantic think-tank the Democracy Institute for the UK's Sunday Express newspaper, gave Trump a 48 to 46 per cent lead over Biden nationally in the wake of the Republican National Convention that closed on Thursday night.

Trump tweeted triumphantly in response to the results:

But crucially the poll also puts Trump in front in five key swing states - Florida, Iowa, Michigan, Minnesota and Pennsylvania - and even in New Hampshire, which backed the Democratic candidate in six of the last seven elections.

"Although Biden remains in a competitive race with Donald Trump, and may well do so until election day, his support isn’t growing," said Democracy Institute director Patrick Basham, who believes the Democrat has already hit his "high water mark."
The pollsters predict Trump will win by a landslide under the electoral college system of US presidential elections, gaining 309 delegates to Biden’s 229.

"Almost all of the issues that matter most to voters are trending in President Trump’s favour," Basham said. "More Americans are concerned about the economy and keeping their current, or getting a new, job."

"They don’t especially blame Trump for the lockdown-induced economic contraction, and they think he’ll do a better job of righting the economic ship than Biden."

The poll also put the president's support among black voters at 20 per cent - up from 8 per cent according to 2016 exit polls - and 38 per cent for Hispanic people. The two ethnic groups make up around 30 per cent of the US population.

Polling so far for the election has put Biden in front and headed for an easy victory in November. But the Democracy institute survey found that Trump enjoys an increasingly overwhelming lead among "shy voters" who don't like to tell pollsters they intend to vote for him, up to 71 per cent from 66 per cent a month ago.

On Saturday, liberal film director Michael Moore ​warned complacent Democrats that Trump could still win. "The enthusiasm level for the 60 million in Trump’s base is OFF THE CHARTS!" he wrote. "For Joe, not so much."

"The Biden campaign just announced he’ll be visiting a number of states — but not Michigan. Sound familiar?" Moore asked.

Trump mentioned Moore's comments and the fact that the film-maker predicted the president's victory in 2016 in another tweet on Sunday:

The Democracy Institute was founded in 2006 and has offices in Washington DC and London. Basham and several of the think-tank's advisory council are also members of the libertarian Cato Institute.

000000
Popular comments
The man is pathetic, crowing over a non existant pole from the very man that constantly says polls are fake.....considering Trumps long history, Fake is what he does best so it fits.