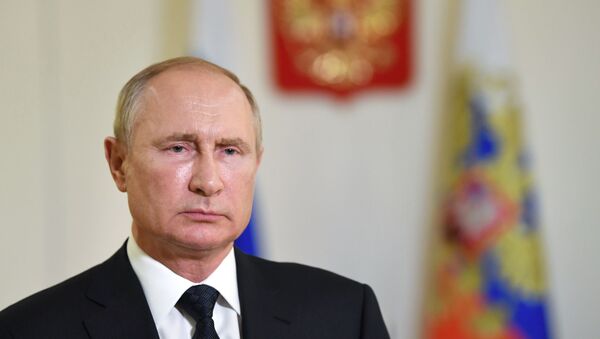 PETROPAVLOVSK-KAMCHATSKIY (Sputnik) - Russia recognises the legitimacy of the 9 August presidential election in Belarus, President Vladimir Putin said on Saturday in an interview with the Rossiya 1 television channel.

"The Belarusian authorities have invited the OSCE ODIHR [Office for Democratic Institutions and Human Rights] to take part in monitoring the elections. Why did it not come? This immediately makes us think that, in fact, a position on the results of these elections had already been formulated. Therefore, someone may doubt the results, but I have every reason to doubt that those who doubt [the election results] were completely honest", Putin said.

"Therefore, we proceed from the fact that the election took place. We — I did it right away — we recognised its legitimacy. And as you know, I congratulated Alexander Grigorievich Lukashenko on his victory in this election. That is all", Putin added.

On Thursday, Russian President Vladimir Putin said in an interview with the Rossiya 1 television channel that he had put together a reserve of law enforcement officers to provide assistance to Belarus should the need arise, as per the request of Belarusian President Alexander Lukashenko. He stressed, however, that it would be a last resort to be applied in case extremist forces in Belarus take advantage of the current situation to ignite unrest and disorder.

Mass opposition protests broke out across Belarus following a presidential election on 9 August that saw President Alexander Lukashenko re-elected for a sixth term. While electoral authorities maintain that Lukashenko collected over 80 percent of the vote, the opposition insists that his key contender, Svetlana Tikhanovskaya, won the election. Opposition figures also accuse the security forces of resorting to excessive violence during the protests.