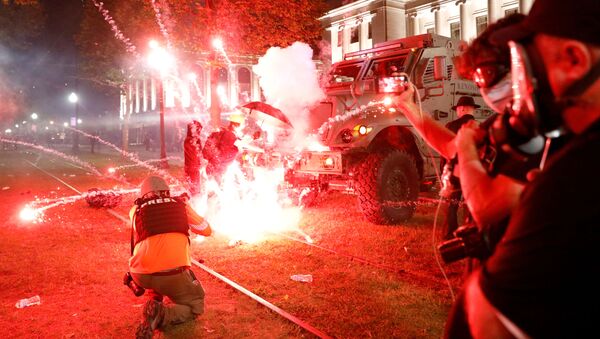 Wisconsin witnessed a third night of protests in Kenosha after a police-involved shooting of a black man, who is said to be paralysed at the moment. Violence continued on Tuesday night, with fires and clashes with police reported in the city.

The demonstrations were initially peaceful, but many of the protesters defied the 8 p.m. curfew and walked toward the fenced courthouse, which sustained damage on the first night of unrest on Sunday.

After a crowd of several hundred tried to topple the fence, police in riot gear streamed from the building toward protesters, some of whom threw stones and fireworks at the officers.

Protesters have begun to try to push over a fence in front of the courthouse in Kenosha. Sheriff’s deputies in riot gear have emerged from the courthouse. Some are throwing projectiles at the officers. pic.twitter.com/mkRMuUx3TK

​At about 9:30 p.m., military-style armoured vehicles pulled in front of the building and released clouds of tear gas into the crowd, which backed away into the nearby park.

​Riot police cleared rioters from the park shortly before 10 p.m., as they ignored warnings to disperse.

Riot police forcing protesters out of the park opposite #Kenosha courthousepic.twitter.com/OgWqCBNakX

​A dumpster was set on fire near a gas station in the area of 63rd Street and Sheridan Road at around midnight. A man was filmed using a portable extinguisher to put out the fire.

A #Kenosha dumpster was just set on fire. Extinguished by people on the property of a nearby gas station. pic.twitter.com/i95NRKqsnv

​A mask-wearing girl was seen breaking apart slabs of concrete, apparently for protesters to throw them at police.

KENOSHA: a young girl removes slabs of concrete from public property and breaks them apart so others can assault police officers

I took a video of her below with her mask down

​While rioters were fleeing the scene, an armed civilian was seen shooting at close range as people approached him. One person is said to be in critical condition after being shot in the head, with two others injured.

Multiple gunshots in Kenosha. It’s a war zone out there. pic.twitter.com/F1K4eVNk4O

​Police cordoned off the scene and found rifle casings on the ground.

Reporting live from the crime scene where a man was shot in the head and taken to the hospital during the #Kenosha riots . His condition is currently unknown but will provide those updates as they come. Police finding rifle casings on the street. #Wisconsin pic.twitter.com/IqGCWObHLe

​A car was set on fire at a car dealership where the protester was shot in the head.

The rioters were about to torch the property in retaliation but police showed up in time to stop them #Kenosha pic.twitter.com/qwPCBUr9wq

​Rioters were seen smashing the windows of cars at another shop with bats and stones.

​Wisconsin Gov. Tony Evers declared a state of emergency on Tuesday night, doubling the National Guard deployment in the city from 125 to 250.

The riots erupted on Sunday following the police-involved shooting of a black man named Jacob Blake, 29.

Blake, who reportedly had an arrest warrant out for rape and domestic abuse, was shot seven times at close range in the back by two white police officers.

A bystander’s video of the incident shows that Blake attempted to get into his SUV with his three sons, ages 8, 5, and 3, inside, while the officers were yelling at him, “Drop the knife!”

Blake is hospitalised in stable condition; the shots appear to have severed his spinal cord and shattered his verterbrae, an attorney for his family said on Tuesday. “It is going to take a miracle for Jacob Blake Jr. to ever walk again,” he added.

Blake’s family now plans to file a civil lawsuit against the Kenosha Plice Department to “hold the wrongdoers accountable”.

The night before, crowds of rioters set fire to dozens of buildings; at least half a dozen buildings were burned to the ground, including small businesses and a probation and parole office.