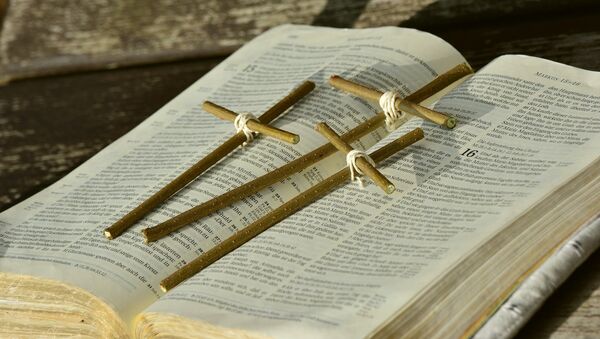 Along with seemingly validating a particular Biblical account, the inscription found in the tunnel also appears to be “the only inscription from ancient Israel that commemorates a public works program”.

An archaeological discovery made inside a legendary tunnel located beneath Jerusalem may serve as a testament of the Bible's "historicity", the Daily Express reports citing Tom Meyer, a professor in Bible and theology at Shasta Bible College and Graduate School in California.

According to the newspaper, the tunnel in question, known as the Siloam Tunnel or Hezekiah's Tunnel, was built about 2,700 years ago in order to supply water to the city during an impending siege by Assyrians, with the Book of Kings attributing its construction to King Hezekiah.

And as Meyer explained, there's "ample archaeological evidence" that appears to corroborate the aforementioned biblical account, with the professor pointing at the discovery of a particular inscription inside the tunnel itself, made back in the 19th century.

"Though the American historical geographer, Edward Robinson, was the first person to explore the tunnel in modern times - 1873 - it was a local boy named Jacob Spafford - the adopted son of the famous hymnist Horatio Spafford - who, while playing in the tunnel, stumbled upon one of the most important ancient Hebrew inscriptions ever found – 1880", Meyer said. "The inscription is significant not only because it validates the Biblical account, but because it is the only inscription from ancient Israel that commemorates a public works program and is one of the oldest examples of Hebrew writing."

While the inscription apparently sustained irreparable damage during its removal, Meyer said that it "contained a description of workers tunnelling under Jerusalem from two opposite ends", made to commemorate their accomplishment.

"Hezekiah’s tunnel, which still brings water into Jerusalem to this day, was an incredible feat of engineering; along with the epigraphical evidence - the accompanying Siloam Inscription - Hezekiah’s tunnel demonstrates once again the historical reliability of the Biblical account", the professor added.

The inscription itself is stored in the Istanbul Archeology Museum because, as Meyer noted, the area where it was found was "under the dominion of the Ottoman Empire" back then.