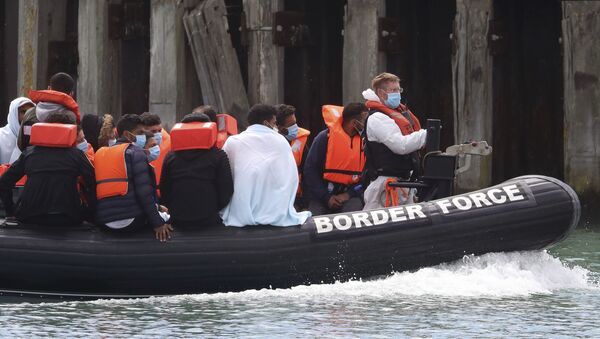 © AP Photo / Gareth Fuller
Subscribe
Svetlana Ekimenko
All materialsWrite to the author
Amid accusations of not doing enough to prevent migrants from arriving in the UK, France earlier sought additional finances from the British authorities to guard the English Channel against the spike in illegal crossings, with the Royal Navy called in for the first time this summer to help tackle the crisis.

The remarks were believed to have been made in a private zoom conference call with Tory MPs, where Patel was said to have remarked:

“France is a racist country. They would rather come to England.”

The Home Secretary was also reported to have vented her frustration over Downing Street’s insufficient efforts to crack down on the Channel migrant crisis, echoing a chorus of similar sentiments from Tory backbenches.

“I could see this coming. I have been on about this since I was appointed last summer,” Patel was suggested as having stated.

The Home Secretary reportedly added that the issue had not been given due priority.

“I said around the Cabinet table we should be sitting through the summer recess to get legislation done… And I was in a minority,” said Patel, according to the publication.

The Home Secretary was also suggested as having deplored attempts to frustrate her efforts to deal with the migrant problem, giving the impression that either Prime Minister Boris Johnson or his top aide, Dominic Cummings, were thwarting her. 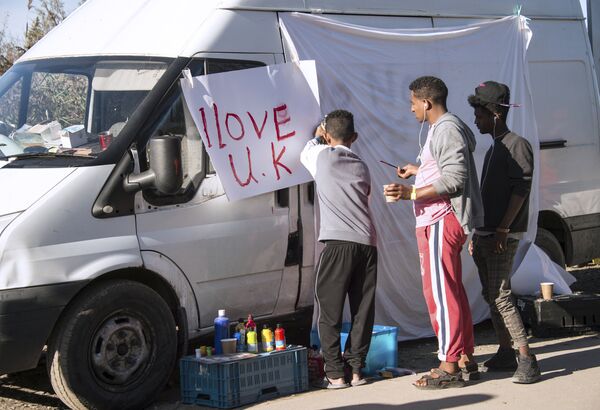 Young migrants paint a sheet of paper with the lettering 'I love UK' in the 'Jungle' migrant camp, in Calais, northern France, on October 31, 2016, during a massive operation to clear the squalid settlement where 6,000-8,000 people have been living in dire conditions.
© AFP 2021 / Philippe Huguen

Government sources subsequently rejected the report, writes the outlet, claiming that Patel had only been relating what migrants had been saying about France.

“Priti made clear these were migrants’ views – not hers,” a No. 10 source was cited as saying.

It was also added that the Home Secretary had dismissed migrants’ claims they feared possible torture if they were returned to France as “nonsense” spouted by “activist lawyers”.

Sources also insisted Priti Patel was venting frustration with legal restraints, not anyone specific standing in the way of her efforts.

It was suggested Patel was “covering herself” due to the criticism she was fending off from colleagues over the migrant crisis.

“It looks incompetent and is incompetent that we can’t stop rubber dinghies coming across the Channel when people are being told they can’t go on holiday to Spain,” the outlet cites the source as saying.

Nonetheless, the report enraged French politicians, with one said to have condemned Patel as “not a politician who does much thinking.”

An MP from France’s opposition Republicans party was cited as saying:

“Madam Patel has caused a lot of upset already with absurd and untrue claims about our forces not stopping immigrant boats. Wherever these latest claims about racism came from, Madam Patel should not be spreading them in such a callous manner.”

Another politician from President Emmanuel Macron’s ruling LREM party was quoted as adding:

“Hateful claims are not a healthy part of politics, but this woman seems to spread them all the time.”

The UK Home Office was quoted as saying on Saturday night:

“The Home Secretary is clearly frustrated by the increasing number of small boats crossing the Channel’ and said that, by the end of the Brexit transition period, the right legislation would be in place.”

Previously, Priti Patel was understood to have informed France that the additional £30 million requested by French authorities to tackle the migrant problem would not be forthcoming unless they improved their efforts.

Accusations that France was not pulling its weight in tackling the issue came as the UK struggles to contain the soaring numbers of clandestine crossings. 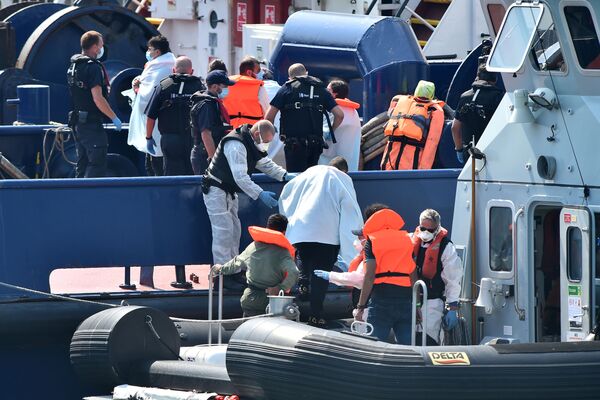 UK Border Force officers help migrants, believed to have been picked up from boats in the Channel, disembark from Coastal patrol vessel "HMC Speedwell", in the port of Dover, on the south-east coast of England on 9 August 2020. (Photo by Glyn KIRK / AFP)
© AFP 2021 / Glyn Kirk

The Royal Navy has been called in for the first time this summer to help deal with the crisis, after over 1,000 people reached the UK shores in the last ten days, reported The Telegraph.

On Saturday, the Ministry of Defence announced it was dispatching a specialist team to “support the daily running of Border Force operations”.

Although no Navy ships have been requested, nothing was “off the table” according to the Ministry.
So far, over 4,500 migrants have made the journey across the Channel this year, compared to around 1,800 the year before.