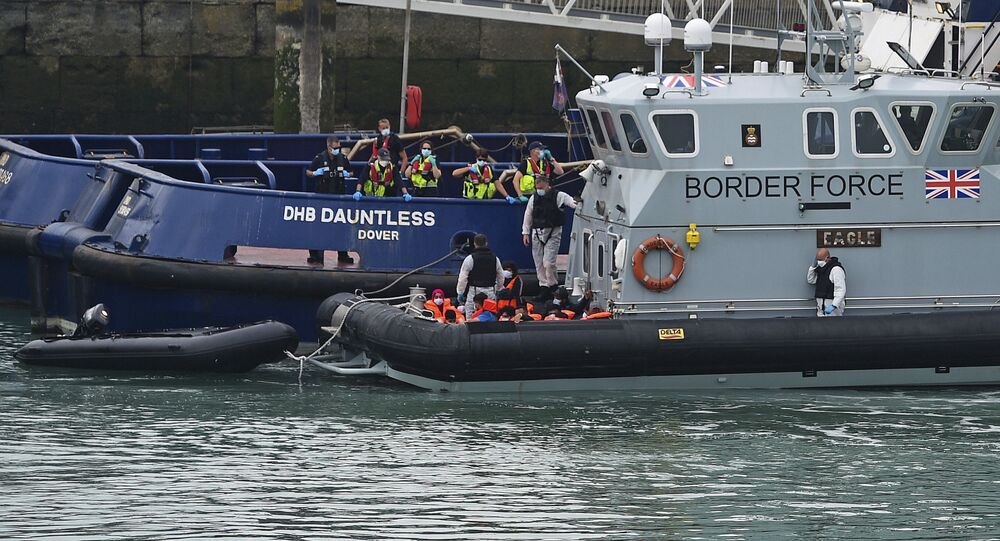 The French politician's comments came as migrants continued to illegally cross into in the UK by sea on Wednesday. While the removal of 19 people was put on hold in line with a last-minute court order, 14 others were taken back to Germany and France, the countries where they had first claimed asylum.

Calais Mayor Natacha Bouchart has said the UK government needs to take responsibility for the migrant deadlock on its borders and called out the Home Office for requesting military assistance.

"It is a declaration of maritime war", she said, accusing the British of "contenting themselves with giving lessons and by subjecting Calasians to this situation for too long".

She insisted that Calais should not have to continue to suffer economic and reputational losses as well as those in terms of humanitarian reception.

"We in Calais no longer want to be permanent hostages enduring the lectures of British leaders", she stressed.

A former Conservative leader promptly weighed in arguing that Ms Bouchart's comments were "ridiculous", with Tobias Ellwood, the chairman of the Defence Select Committee, accusing her of using "irresponsible language". He went on to call for greater collaboration in the field, rather than waging wars:

"Let's stay focused on increasing Anglo-French collaboration to solve the problem, not ratcheting up tensions with dramatic statements", Ellwood said.

"Stopping migrants making dangerous crossing is the opposite of war – it's about saving people's lives", a source told The Telegraph regarding Bouchart's fierce rhetoric.

The French politician's comments came as more migrants arrived in the UK on Wednesday, the ninth day in a row.

Britain's Border Force and the Royal National Lifeboat Institution stepped up work in the English Channel as they responded to attempted migrant crossings on Wednesday.

The Royal Air Force also provided aerial support for the Border Force for the second time this week, with a Poseidon maritime patrol aircraft flying from Kinloss Barracks in Scotland to monitor the developments in the English Channel.

The Ministry of Defence confirmed that Ben Wallace, the Defence Secretary, had also authorised the use of Shadow R1 aircraft. Both will provide support "over the coming weeks subject to weather conditions and the Border Force's requirements", the MoD said.

At least 19 asylum seekers who arrived in the UK after crossing the Channel in small packed boats and were due to be deported on Wednesday have had their removals paused, the news agency PA reported.

Despite a legal challenge having been launched this week in a bid to halt the deportation of a group of asylum seekers who arrived in the UK by sea, the Home Office has called for a charter flight to take 14 other migrants to France and Germany after the department found they had already claimed asylum in one of the two countries in the past. The Home Office argued they should have their asylum claims dealt with there under a process known as the Dublin Convention, whereby an asylum claim is dealt with in the first safe European country a refugee arrives in.

"These flights are a key part of the UK's strategy to stop the illegally facilitated crossings from France to the UK. All those due to be on the manifest were served with removal directions with a minimum of five working days' notice", a Home Office spokesman said.

There is no comprehensive data from the UK authorities on those who arrive in the UK in small perilous boats, but analysis by PA Media puts the number of those who have crossed the Channel in the past several months at more than 4,100.

"To put it plainly, France is already full. A lot of cities are dominated by migrants, it’s not unusual that immigrants and their descendants make up a majority. The society slowly turns into an image of their country of origin, characterised by the very phenomena they fled from. Migrants wants to enter Western society, not an impoverished Paris ghetto. An agreement about immediately sending the migrants back would stop this route, but the problem is France is quite happy to get rid of them. To really solve this, you would have to stop the Mediterranean route to Europe", says Vavra Suk, a journalist specialising in European illegal migration.

To address the issue, the 40-strong Common Sense Group, made up of Tory MPs and peers, called on Home Secretary Priti Patel to "bring in legislation to fix the broken asylum system".

Report From Calais Where I’m Attacked by Migrants, Police Stand by