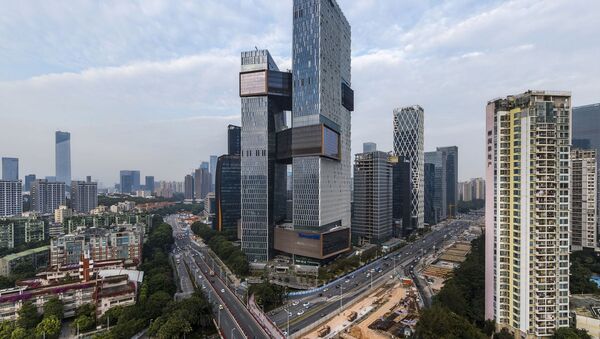 Demond Cureton
All materialsWrite to the author
US President Donald Trump threatened to ban TikTok and WeChat by 15 September if they were not sold to a US company, triggering a lawsuit from TikTok owner ByteDance and sparking further diplomatic rows with Beijing. But just how effective would a ban on WeChat's US operations be in the long-term?

The popular social media platform, WeChat, was launched in 2011 by Chinese tech giant Tencent Holdings, who also owns QQ Messenger and numerous gaming platforms such as Riot Games, as well as stakes in Fortnite and Snapchat.

Yuwan Hu, research director for Daxue Consulting in Shanghai and Andy Mok, senior research fellow for the Centre For China and Globalisation, discussed the implications of a potential ban on WeChat in the United States.

Beijing to Raise TikTok, WeChat Ban With Trump in Phase One Trade Talks as US-China Relations Slide
According to figures, the number of monthly active users for WeChat stood at 1.1bn, including its Chinese and international versions, Ms Yuwan Hu told Sputnik.

WeChat did "not have a direct competitor" to date in China as it was "a combination of social media and e-commerce apps on the global market", she said.

Despite this, the app was not a direct competitor to Facebook or WhatsApp in the overseas market and a ban "might not be an effective solution" compared to other economic and political challenges, she added.

"In fact, many users in specific regions such as China, the US, Europe and Asia-Pacific will just spend more time on their respective local apps. When not physically in China, Westerners may prefer to use WhatsApp or Facebook more, with Asians having a higher preference towards Line," she said.

Overseas users partly affected by the measures would turn to such alternatives, she said, adding critical services affected by the potential US ban would "have some impact on the current user experience".

"However, I would not worry much about technologies like artificial intelligence or online payment systems," she added.

She concluded: "It is an app that has monopolised the digital era. However, it is also a good one to learn from, exploit and challenge in order to boost [market] competitiveness."

According to Mr Andy Mok, China had the largest number of WeChat users, but the social media app was "used mainly by those with a connection to China" in the US.

But the effects of such a ban would be based on geopolitical agendas, posing some long-term risks to Chinese businesses, he added.

"This is bad for Chinese firms since they are being targeted not for their behaviour, but for who they are," Mok said.

Speaking further on the matter, Mr Mok explained the differences between Chinese regulations on social media apps and US restrictions, stating that there were "unfair" practices on behalf of Washington.

"China only requires companies comply with Chinese laws and regulations, whereas the US approach is to ban or restrict companies and individuals based on who they are. This is not only unfair but detrimental to American interests," he concluded.

According to reports, Facebook and Twitter were banned in China following the 2009 Ürümqi riots in Xinjiang, which left nearly 200 dead and injured over roughly 1,000.

Beijing is set to address concerns over the potential bans in upcoming phase one trade negotiations, according to US media reports, where the two sides will hold talks on agricultural trade and currency exchange rates, among others.

ByteDance may relocate its Beijing headquarters to London but would wait for a government statement on doing so, media reports citing sources familiar with the matter wrote this week.

000000
Popular comments
TikTok should drag out negotiations as close to the November election as possible, then refuse to sell......a ban at that time would certainly irritate a lot of the 150 million US users (voters) as they decide on the next POTUS.

Erik Trete
13 August 2020, 15:45 GMT3
000000
China does not have to sell TIK TOY to the USA. China has to replace the dollar as an international currency and put the Yuan or Euro in place of the dollar on the SWIFT platform (The Society for Work Interbank Financial Telecommunication), putting an end to American sanctions. The US dream is a nuclear war with Russia and China, on European and Asian soil, while the US is protected by the Atlantic and Pacific oceans and, as a result, Europe and part of Asia will be destroyed by war and nuclear radiation . Europe and Asia, must exchange the dollar on the SWIFT platform (The Society for Work Interbank Financial Telecommunication) for another currency, Euro or Yuan, before the USA drag everyone into a 3rd world war (Nuclear), where Europe and part of Asia remained uninhabited for thousands of years because of nuclear RADIOACTIVITY.
x0205
13 August 2020, 18:15 GMT2
000000
Newsfeed
0
New firstOld first
loader
LIVE
Заголовок открываемого материала
Access to the chat has been blocked for violating the rules . You will be able to participate again through:∞. If you do not agree with the blocking, please use the feedback form
The discussion is closed. You can participate in the discussion within 24 hours after the publication of the article.
To participate in the discussion
log in or register
loader
Chats
Заголовок открываемого материала
Worldwide
InternationalEnglishEnglishMundoEspañolSpanish
Europe
DeutschlandDeutschGermanFranceFrançaisFrenchΕλλάδαΕλληνικάGreekItaliaItalianoItalianČeská republikaČeštinaCzechPolskaPolskiPolishСрбиjаСрпскиSerbianLatvijaLatviešuLatvianLietuvaLietuviųLithuanianMoldovaMoldoveneascăMoldavianБеларусьБеларускiBelarusian
Transcaucasia
ԱրմենիաՀայերենArmenianАҧсныАҧсышәалаAbkhazХуссар ИрыстонИронауОssetianსაქართველოქართულიGeorgianAzərbaycanАzərbaycancaAzerbaijani
Middle East
Sputnik عربيArabicArabicTürkiyeTürkçeTurkishSputnik ایرانPersianPersianSputnik افغانستانDariDari
Central Asia
ҚазақстанҚазақ тіліKazakhКыргызстанКыргызчаKyrgyzOʻzbekistonЎзбекчаUzbekТоҷикистонТоҷикӣTajik
East & Southeast Asia
Việt NamTiếng ViệtVietnamese日本日本語Japanese俄罗斯卫星通讯社中文（简体）Chinese (simplified)俄罗斯卫星通讯社中文（繁体）Chinese (traditional)
South America
BrasilPortuguêsPortuguese
NewsfeedBreaking
19:37 GMTThe US Space Force’s Oldest Adversary, Social Media, Roasts Their New Uniforms
19:25 GMTTraffic on Motorway in German Bavaria Halted Due to Armed Hostage-Taking Situation - Reports
19:24 GMTJoe Biden, DHS Chief Upset by 'Horrible' Videos of Border Patrol Dealing With Haitian Migrants
19:24 GMTBiden Believes Footage From US-Mexico Border ‘Horrific’ and Supports Probe
19:15 GMTSoldiers Killed in Galwan Valley Clash With India Now Part of Patriotism Lessons for Kids in China
19:14 GMT‘An Unpredictable Ally’: Does the AUKUS Pact Undermine the Quad's Significance?
19:11 GMTSearch for Fiancé of Gabby Petito, Brian Laundrie, Resumes in Florida Wilderness
18:54 GMTFrench Defenсe Minister Says US Instigating Confrontation With China
18:48 GMTNew ‘Storytelling’ in Skripal, Litvinenko Cases Meant to 'Sabotage' Effort to End Russia-UK Cold War
18:40 GMTTexas Governor Says Biden Has Not Granted Federal Emergency Declaration Over Border Crisis
18:39 GMTWoman Claims US Billionaire Leon Black Raped Her in Jeffrey Epstein’s Townhouse, Media Says
18:29 GMTMigrants Escape After Overtaking Transport Bus
18:08 GMTVolcano Continues to Erupt on Spanish Island of La Palma
17:49 GMT'US Hegemonic System' Has 'Failed Miserably', Iran's Raisi Tells UN
17:24 GMTUSAF Reveals It Has Five New B-21 Strat Bombers in Production, Not Two as Originally Reported
17:07 GMTAncient Pyramid Made From Volcanic Ash Likely Built to 'Calm Earth’s Anger,' Media Says
17:00 GMTDozens Protest Outside UN Headquarters Against US Global Military Engagements
16:43 GMTUS House Democrats Introduce Legislation to Prevent Presidential Abuses
16:35 GMTPalestinians Ready to Renew Talks With Israel If They Show Readiness, Foreign Minister Says
16:31 GMTRussian Embassy in UK Slams Scotland Yard's Approach to Fact-Finding in Skripal Case