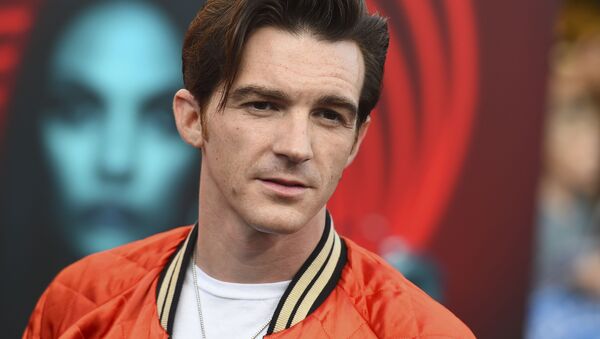 © AP Photo / Jordan Strauss/Invision
Subscribe
Lilia Dergacheva
All materialsWrite to the author
Melissa Lingafelt, Drake Bell's ex-girlfriend from the pre-Amanda Show period, has taken aim at the actor, claiming the climax of physical harassment at his hands was her being dragged down the stairs.

Actor Drake Bell has denied allegations of abuse - verbal and physical - that arose in a video posted to TikTok by his ex-partner, Melissa Lingafelt, prompting an uproar in the comments section.

In a statement to People, the star of Nickelodeon's The Amanda Show hit back at the allegations arguing that he "never abused my ex-girlfriend or did so many of the other things Melissa falsely claimed on her TikTok video".

"As our relationship ended — more than a decade ago — we, unfortunately, both called each other terrible names, as often happens when couples are breaking up", Bell said. "But that is it".

He said Melissa had obviously continued to feel "close" to him, as last year she was comfortable enough to ask him "to provide her with financial support during a tough time, which I did", he recounted.

"I do not know if today's behaviour is some kind of misguided quest for more money or attention", Bell, who is best known for his work on the Nickelodeon programmes "The Amanda Show" and "Drake & Josh", pondered. He admitted though he "cannot and will not allow these offensive and defamatory allegations to go unchallenged" and is considering "legal options" with regard to the latest accusations. Naturally this couldn't go unnoticed on Twitter, with netizens tweeting their support and chewing over the new allegations.

Many pointed to the fact that more than one of his exes has already come forward, anonymously or not, urging to #canceldrakebell:

To everybody claiming that there is no evidence to the Drake Bell allegations-multiple exes of his have come forward since the first one and confirmed the same behavior. Any proof is likely being saved for court. This is horrifying, but also very believable and likely to be true.

DRAKE BELL ACCUSED OF EMOTIONAL AND PHYSICAL ABUSE BY AN EX PARTNER AS WELL AS ALLEGATIONS OF SEXUAL RELATIONS WITH UNDERAGE GIRLS #canceldrakebell pic.twitter.com/vrFhdC3Rgi

and how is that? there are now more stories from ex girlfriends and girls who were MINORS when drake was a grown ass man.

Meanwhile, quite a few shared that it's completely wrong to jump to conclusions largely citing a "random" TikTok video, while no proof has been presented:

Drake Bell is being cancelled for being a pedophile, from some random tiktok post and of course twitter jumps to conclusions. When has that not happened when twitter cancel culture attempts to ruin another stars life (ex: Johnny Depp).

So we get a 1 minute tiktok from Drake Bell's ex that offers no evidence of abuse and claims that she "don't even wanna get into the kid stuff" but yet mentions it anyway to incite outrage from others, and ya instantly believe it. What happened to innocent until proven guilty? https://t.co/LOkhANNWYx

It sucks that she said publicly, she had photo evidence that Drake dragged her down the stairs, yet still keeps teasing that she has evidence, treating her alleged abuse like a goddamn netflix drama, dropping that he was allegedly also a pedo in the last two seconds.

Thirty-year-old Lingafelt, who goes by her stage name Jimi Ono on social media, lashed out at the actor on TikTok on Wednesday, saying the pair began dating when she was 16 years old and was being homeschooled.

"I moved in with him, I was singing. It wasn't until about a year when the verbal abuse started", she recalled.

"And when I say verbal abuse, imagine the worst type of verbal abuse you could ever imagine, and that was what I got", she went on, further stating the abuse quickly turned physical - "hitting, throwing, everything", she continued, accusing Bell of dragging her down stairs in their home at some point during their romance, which lasted from August 2006 until February 2009.

"At the pinnacle of it, he drug [sic] me down the stairs of our house on Los Feliz. My face hit every step on the way down. I have photos of this", the musician claimed.

She later shared the sympathetic responses she had got in direct messages, with someone, whose name was concealed, accusing Bell of having sex with a 15-year-old when he was 20.