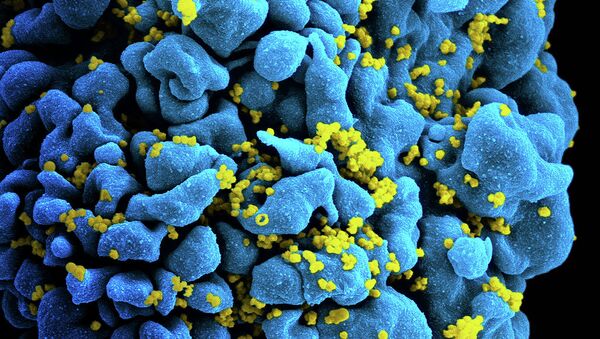 The trial, which will take place in Baltimore, Maryland, and Washington, DC, is expected to begin enrollment in September and will test the safety of AGT103-T, a single-dose gene therapy developed to cure HIV.

“In HIV disease, the HIV-specific CD4 T cells are activated soon after infection similar to other viral diseases. However, HIV targets these cells for destruction because this insidious virus binds to the same CD4 molecule that identifies the helper T cell subset,” AGT explained on its website, noting that the HIV-specific CD4 T cells become compromised after an HIV infection because they fall below the necessary levels required for effective immune function.

“By that point, only antiretroviral medication is effective for controlling HIV, and infected individuals who seek treatment begin a daily drug regimen that must be continued without interruption for life,” the firm adds.

The new, potential treatment thus delivers HIV-specific CD4 T cells to people infected with the virus. By restoring the missing cells, the drug is intended to repair the immune system damage caused by HIV.

“When HIV infection causes this specific damage, killing of T helper cells required for immunity to HIV, the infected person becomes unable to eliminate the virus and thus, becomes chronically infected. AGT’s approach is designed to repair the T helper cell defect and provide durable virus control that is not compromised by HIV strains that vary in sequence or use alternate ways to enter and infect T cells,” AGT explained in an August 11 news release.

The potential cure was developed in collaboration with the US National Institute of Allergy and Infectious Diseases. AGT hopes to report initial findings from the study before the end of the year.

"This is momentous news that we have FDA approval to launch Phase 1 and conduct our first human trials. We are beyond excited to reach this milestone. This brings us closer to our goal of transforming lives with genetic medicines,” AGT Chief Science Officer David Pauza said in the release. “Based on our successful commercial-scale product manufacturing runs and features of the product observed in our labs, this therapy has a high potential to be effective.”

According to UNAIDS, around 38 million people across the world in 2019 were living with HIV. An estimated 1.7 million people worldwide acquired the virus last year.

Xifhdhxhxhcuststsychchc
13 August 2020, 00:43 GMT1
000000
I had something to post about natural healing and how HIV has been easily curable for a long time but it won't let me post my comment for no reason whatsoever so I'll try again later. Kind of upsetting seeing as how we're talking about natural medicine saving lives but I can't post. Stupid automated algorithmic bs.