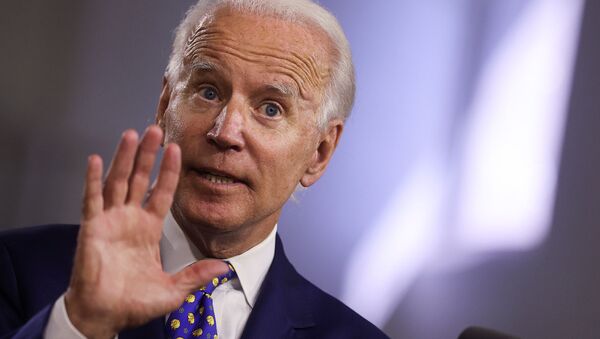 According to US media reports, Democratic presidential hopeful Joe Biden has decided who will accompany him on the November ballots as his vice presidential candidate. His unveiling of the pick could come as early as Tuesday night.

“I’m told by multiple Democrats close to the process that the contenders have now been informed whether or not they’ve been chosen as Biden’s running mate,” Gabriel Debenedetti, national correspondent for New York Magazine, tweeted on Tuesday afternoon. CNN, in turn, reported that Biden told his top campaign advisers on Tuesday morning whom he wants as his running mate.

“This doesn't mean we'll get official word today, of course,” Debenedetti added. “Just that the decision has been made, and that the circle of people who know is getting wider (which is to say: an end is coming soon to this considerable malarkey).”

Biden has long been known to be the Democrats’ only viable candidate - even though the Democratic National Convention has not yet officially nominated him to challenge Republican incumbent US President Donald Trump in the November election - but his pick to run alongside him has been subject to considerable speculation.

As early as March, Biden committed to picking a female running mate, and late last month, amid the nationwide uprisings against anti-Black racism, Biden said he was considering four Black women for the position, though he did not name any names.

However, some of the likely contenders floated by commentators have been former US Ambassador to the United Nations Susan Rice, Atlanta Mayor Keisha Lance Bottoms, former Georgia House Minority Leader Stacey Abrams and US Senator Kamala Harris (D-CA), the lattermost of whom was falsely reported to be Biden’s pick by Politico in a gun-jumping July 27 report.

Another potential, California Representative and chairperson of the Congressional Black Caucus, Karen Bass, confirmed to CNN that she had not been chosen. Fellow contenders Gov. Gretchen Whitmer (MI-D) and Georgia Democrat Stacey Abrams have also been ruled out.