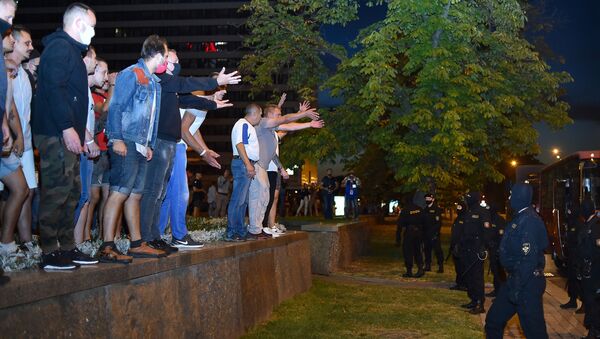 MINSK (Sputnik) - Belarus police have started to detain people on the Victory Square in central Minsk for participation in an unauthorized rally in protest against the results of Sunday's presidential election in the country, a Sputnik correspondent reported from the scene.

Several thousand opposition supporters have gathered on the square, and there are about 15 special police vehicles. Detentions of activists are underway. Several ambulance crews are on duty at the site. The traffic in this area is blocked.

According to Sputnik Belarus, the police used flash-noise grenades to disperse protesters during protests in Minsk. Several protesters were injured and they are currently receiving medical assistance.

The Sputnik correspondent reported that police have started to disperse the protesters on the Victory Square.

Belarusian President Alexander Lukashenko is leading the vote count in Sunday's election with 82 percent, according to an exit poll.