Professor: Level of Crisis in US is Extreme, it Takes the Country Back to Great Depression of 1930s 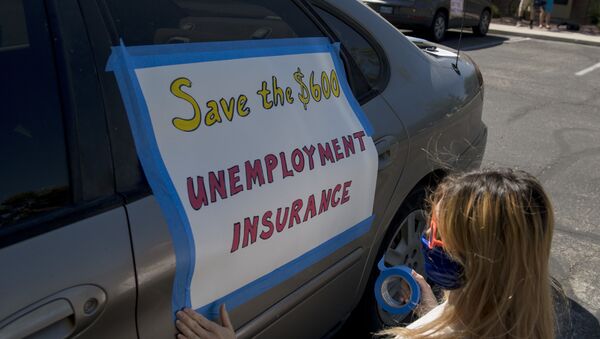 In May, House Democrats passed legislation that would have extended the enhanced unemployment benefits until the end of the year. However, Senate Republicans rejected the idea, saying that such payments would have discouraged unemployed Americans from finding a job.

Richard D. Wolff is Professor of Economics Emeritus, University of Massachusetts, Amherst where he taught economics from 1973 to 2008; he is currently a Visiting Professor in the Graduate Program in International Affairs of the New School University, New York City. Mr Wolff reflects on what next steps the US government might take concerning the coronavirus relief package.

Sputnik: In May, House Democrats passed legislation that would have extended the enhanced unemployment benefits until the end of the year, but Senate Republicans have opposed doing so, arguing that the payments dissuaded unemployed Americans from seeking work. Could you please describe two possible scenarios: 1) if the bill is extended until the end of the year, and 2) if the government gradually reduces unemployment benefits?

Richard D. Wolff: If they extend the benefits, the extra $600 per week for unemployed people, they will be continuing a basic government lifeline. It is one of the few programs that is helping the average American family and the average American business because of the fact that we have over 30 million people now collecting this kind of money, not all get it, because it varies from state to state and so on. But basically it is supporting the demand for basic goods and services, food, clothing, shelter and so on. So it will not get us out of the depression that the American capitalist system is in, but it will prevent it from collapsing. 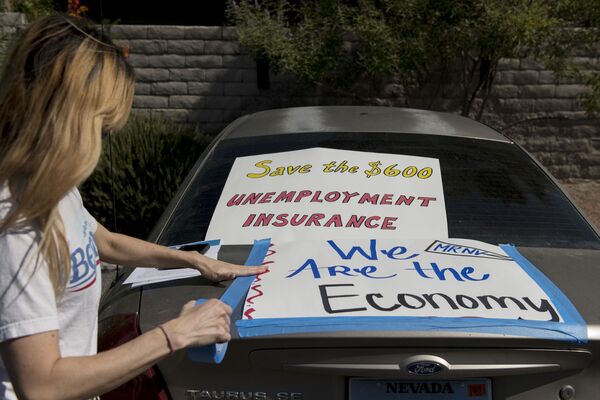 Francis Stallings tapes signs to her car before participating in a caravan rally down the Las Vegas Strip in support of extending the $600 unemployment benefit, August 6, 2020 in Las Vegas, Nevada.
© AFP 2022 / BRIDGET BENNETT

If they do not continue this program, it has nothing to do with the business about incentivizing people to go back to work. It is true. It is true that if you are a very low paid worker and you went on unemployment, you may be getting a bit more money, not very much more, but a bit more money on unemployment than you were getting from work before. But this is not relevant because every person on unemployment knows that unemployment will stop. It will maybe not stop this week, but it will stop in a few weeks or at the most a few months. And at that point, they will have no more money from unemployment and they will not have a job. And that is the worst of all situations for them. So if they can get a job now, even if it pays them a little less, they will do that because it is in their interest to do that. So what is the result if the Republicans persist? Well, the real reason they are doing this is because they want to force large numbers of people to take lower wages than they got before because if the unemployment is cut off, people will be desperate. 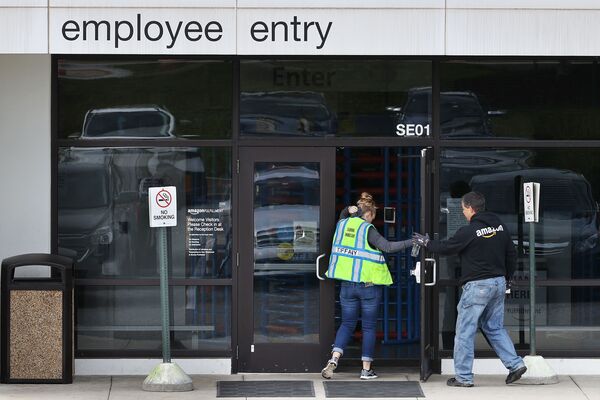 In this file photo taken on April 14, 2020, some of the 2500 employees at the 1.2 million-square-foot BWI2 Amazon Fulfillment Center arrive for work in the Chesapeake Commerce Center in Baltimore, Maryland.
© AFP 2022 / CHIP SOMODEVILLA

And in that desperation, they will go back to work, even if the store or the restaurant that employs them gives them lower wages than they got before the pandemic, which they are free to do. There is no government program that prevents employers from taking away from workers if they come back. That's what the employers want. And that's why the Republicans are doing it. My last point, if you take away the $600 a week you will make it impossible for at least 10 million people to pay their rent for their apartment or to pay for the mortgage if they own their home.

And we will then see an absolute disaster of evictions, of people being forced out of their homes and to become homeless. And the economic impact on the United States, as well as the political impact, will make the current crisis much worse. And that's the reality. 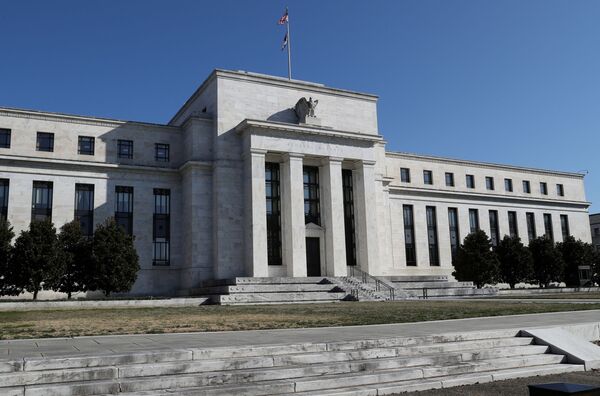 Sputnik: Can the economy afford an extension of the bill?

Richard D. Wolff: Yes. They have stopped worrying about that problem. In other words, it's very important for people around the world to understand that the level of crisis in the United States, both the coronavirus crisis and the economic collapse are so extreme that they take us back to the Great Depression of the 1930s. And the approach of the government is to do anything and everything immediately, because if they cannot fix this problem, then the future of this country is no longer clearly to be in existence. So the Federal Reserve, our central bank, is literally creating money out of nothing and giving it to corporations in loans, to banks, in loans. And could they give out this money in the form of funding the unemployment insurance? Absolutely no problem at all. And it simply would be another way to stimulate the economy alongside the money they make available to corporations and to banks.

Sputnik: If unemployment benefits are cut, are there enough jobs for people at the moment?

Richard D. Wolff: Absolutely. There are two kinds of jobs. If you want to give everybody a job in the private sector, then it would be the job of the government to step in and create the demand. One way or another for the production that would enable those jobs. Number two, let's remember how this problem was solved in the 1930s in the United States. In the 1930s when we had unemployment about as bad as it is today the federal government became what we call here, the employer of last resort. That is, the government created government jobs, not the private sector, government jobs, where the government gave you the job, put you to work, paid your salary. That was done for 15 million people in the 1930s. It could easily be done for all the unemployed right now. And what could they do? They could do the Green New Deal.

We have very serious infrastructure problems in the United States. We have a great deal of work to do to make our country ecologically secure. Lots of work, no problem. The Federal Reserve can issue the money and the people can be put to work producing socially useful things as government employees.

Sputnik: How likely is it that decreasing the unemployment insurance benefit payments in August will drive an increase in employment?

Richard D. Wolff: Yes. If they cut the benefits the unemployment will get worse. Because that's what I meant at the beginning when I said it's a lifeline. If you stop giving unemployed people the extra $600, they can't spend that money. And if they can't spend that money on goods and services, millions more will lose their jobs because there'll be no market for what they were producing. That's one of the reasons why most economists, even conservative ones, want to see this $600 continue because of the disaster that looms if you do not do that. 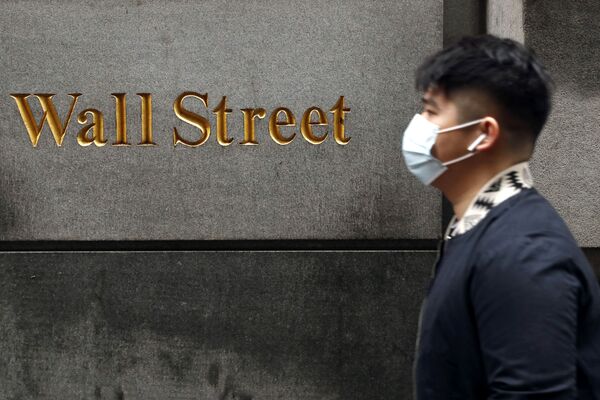 Sputnik: Could you describe the situation in your state before and after the bill? How did your state cope with such crises in the past?

Richard D. Wolff: Yes, I live in Manhattan in the middle of New York City.

And clearly what has happened here is we see roughly half in the neighbourhood that I live in. Roughly half of the stores are closed. That is the department stores, restaurants, half of the stores are closed. We have many, many fewer people on the street and we have a growing population of beggars, of homeless people. You have a feeling of a society that is under some kind of serious threat.

People are afraid to go out of their homes in the evening when it's dark. And so you can go to the supermarket, you can get your food. There are a few restaurants.

You are not allowed to go inside a restaurant to eat, but you can go to the restaurant, collect your food and take it back home with you. But it's a very depressing experience. Living here and having the stores all covered with wooden protection gives you a sense of living, you know, almost in a kind of a war-torn society.