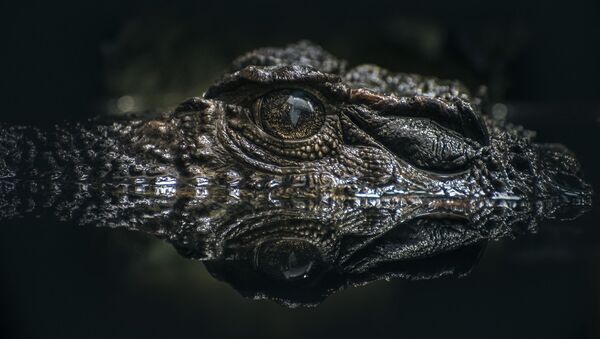 CC BY 2.0 / Alexander Cahlenstein / Lurking crocodile
Subscribe
Andrei Dergalin
All materialsWrite to the author
The new study reportedly suggests that the ancient reptile in question was an aquatic ambush predator whose quarry were fish and squid.

Scientists studying the ancient history of our planet have recently managed to gain further insight into the nature of a reptilian creature that existed on Earth during the Triassic period, tens of millions years ago.

As CNN points out, while the creature in question, called Tanystropheus and "resembling a real-life Loch Ness Monster or a prehistoric crocodile crossed with a giraffe", was first described back in the 19th century and first reconstructed in 1973, much about this creature remained unknown, such as whether it dwelt on land or in the water, what its young looked like, etc.

Having employed computed tomography to study the fossilized remains of these creatures, the researchers established that the skull anatomy and nostrils' placement of the 20-foot long creature whose neck "was half of its entire length", show "characteristics of an aquatic animal", with further evidence suggesting that it was an "ambush predator".

"That long neck wasn't very flexible, it only had 13 vertebrae and it had ribs in it that further constrained mobility," said Olivier Rieppel, paleontologist at the Field Museum in Chicago and one of the authors of the new study's. "But our study shows that this strange anatomy was much more adaptive and versatile than we had thought before."

Today we welcome Tanystropheus hydroides into the world! Actually, it is 242 MILLION years old, but scientists including our very own @tanytrachelos, have only just recognized the new species of this bizarre long-necked reptile. Check out the full paper: https://t.co/6V5qFvX6is pic.twitter.com/HCcKd2kSwC

​The researchers also determined that smaller fossils that was previously thought to have belonged to a baby Tanystropheus, actually belonged to a different species that were only 4-feet long.

"The small individuals are also fully grown, and that was surprising," said Torsten Scheyer, research associate at the University of Zurich and one of Rieppel's co-authors. "It's like the growth rings of a tree -- from this you can basically reconstruct the history of these animals."

Lead study author Stephan Spiekman, an expert in Triassic reptile evolution at the University of Zurich, also explained that "the small species likely fed on small shelled animals, like shrimp, in contrast to the fish and squid the large species ate", Science Alert notes.

"This is really remarkable, because we expected the bizarre neck of Tanystropheus to be specialised for a single task, like the neck of a giraffe. But actually, it allowed for several lifestyles", he remarked. "This completely changes the way we look at this animal".