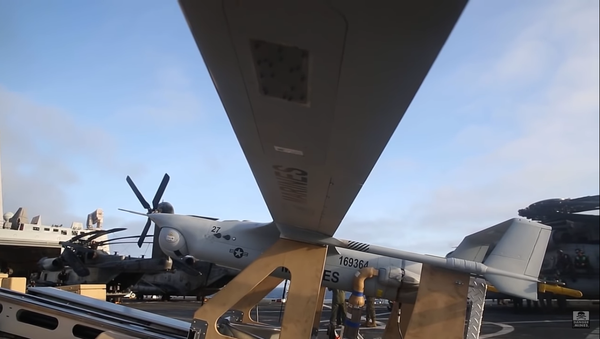 The US Navy’s R1-21A Blackjack surveillance drones could soon have a new sensor pod that is capable of watching an entire city at once.

Engineering company Logos Technologies announced last week it had received a $6.7 million contract from US Naval Air Systems Command (NAVAIR) “to develop, deliver, and perform proof-of-concept flight tests on a wide-area motion imagery (WAMI) sensor” by the end of September 2020.

The contract includes two infrared sensor pods, adapted from the company’s 28-pound BlackKite sensor, which would be mounted underneath an R1-21A Blackjack unmanned aerial vehicle.

According to the release, the BlackKite is capable of surveilling about 5 square miles simultaneously.

“What really makes WAMI special is the fact that it can monitor all of the movement - both dismount and vehicles - in a city-sized area. You can kind of think of it like live Google Earth with DVR [digital video recorder] capability,” Doug Rombough, vice president for business development at Logos Technologies, told C4ISRNET on Monday.

“Prior to WAMI, you had simply the full-motion video sensors; and obviously full-motion videos [FMV] are awesome because they are very high resolution. They can zoom in on an area. The challenge with FMV is you’ve got that very narrow field of view, kind of like looking through a soda straw.”

C4ISRNET noted that a Blackjack drone with a WAMI sensor would be a dramatic miniaturization of the technology. At present, the MQ-9 Reaper is the only other unmanned aerial vehicle with such a sensor pod, and it is required to fly from regular airfields. By comparison, the Blackjack is launched from a catapult that can be towed or mounted on a ship, and recovered using a crane device.