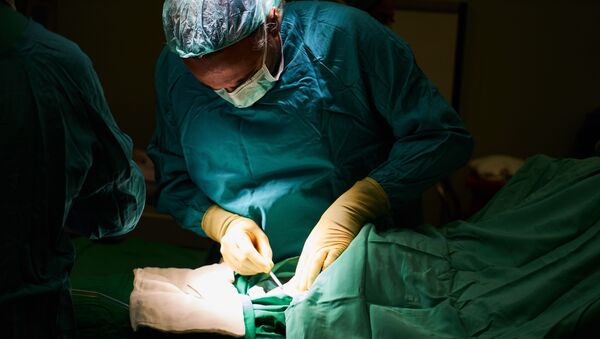 Back in 2014, a mechanic from Norfolk, UK, lost a vital part of his body and self-esteem – his male genitalia. The incident was the result of a long-term perineum infection that resulted in the father-of-two losing all hope for a happy life. He was then offered the chance to undergo some radical treatment to reunite him with his important member.

A British man has been living with a penis growing on his arm for four years now, after an illness, scheduling mix-ups and now the COVID-19 pandemic delayed an operation that should have seen his manhood re-attached to the place where it was originally supposed to be, according to his interview with the Sun.

Malcolm MacDonald, a 45-year-old mechanic from Norfolk, saw his penis turn black and fall off his body in 2014, following a pro-longed blood infection that developed into sepsis.

“When I saw my penis go black I was beside myself”, the man explained. “It was like a horror film. I was in a complete panic. I knew deep down it was gone and I was going to lose it. Then one day it just dropped off on to the floor”.

He said that doctors were unable to help him at that time, as they only offered “to roll the remaining stump up like a little sausage roll”. For a separated father of two, this was a heart-breaking moment.

“For two years after losing my penis I felt a shadow of a man. My life really fell apart because I had no self-confidence”, Malcolm recalled. “I drank too much. I didn’t see family and friends - I just didn’t want to have to face up to it.”

But then something gave him a glimmer of hope for a happy life after he was told about Professor David Ralph from London’s University College Hospital, who is believed to be an expert in phallus construction. Malcolm was then offered to have a new penis grafted into his arm to then be removed in two-years time and placed in his groin, something the man did not mind doing at all, having a complete trust in doctors. Surgeons then used a skin flap from his left arm to form a penis-like structure with nerves and blood vessels. They also separately built a urethra and installed two tubes that can be inflated mechanically, from a hand-pump, allowing the genitalia to erect at will. The penis structure was then detached from the forearm in order for it to dangle naturally, while still remaining on the man’s arm.

According to Malcolm, he was really proud when he saw his new genitalia built on his arm for the first time – something he did not find to be weird at all, as he even gave a nickname to his new buddy.

“I was like any other man, I just couldn’t leave it alone to begin with. I thought it was the best thing ever”, he says. “I took to it so much I nicknamed it ‘Jimmy’ - that was what me and my mates called each other growing up and this penis was definitely my new mate.”

Malcolm was supposed to have ‘Jimmy’ re-attached to a place where it was meant-by-nature-to-be in 2018, but he did not feel well at that time and the operation was postponed. Later it was delayed again due to another number of issues, including transport and scheduling mis-ups, as well as staff shortages, until it was finally moved to April. But then, coronavirus health crisis hit the UK.

Former Liverpool Doctor Reveals How He Stitched Up Steven Gerrard's Penis After Horrible Tackle
“It feels like I’m cursed sometimes”, complains Malcom, who has been living with a penis growing from his arm for four years now. And he finds the situation “really strange” at best.

“Of course it is mad - having a penis on your arm. Not even I am used to it. But when you think about it, it's actually amazing”, the man says, noting that he had to resort to wearing long-sleeved tops now and is no stranger to occasionally making fun of his situation, especially when people spot something unusual with his arm.

“If I couldn’t laugh at the willy on my arm I’d be finished”, Malcolm says. According to him, despite delays, he is “determined this penis will be ultimately used for what it was built for”. The re-attachment operation is now expected to take place by the end of the year.