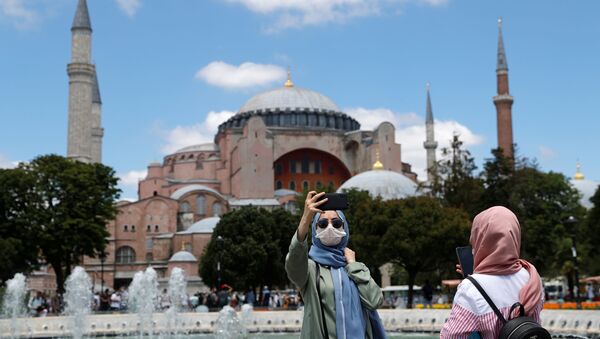 Live outside Istanbul’s Hagia Sophia as the first prayer takes place there after Turkey’s Council of State issued a resolution to turn the world heritage site back into a mosque.

Five hundred people are permitted to stay in the mosque for the prayer, with thousands more estimated to join from outside the mosque.

On July 10, Turkey's highest administrative court, the Council of State, annulled the 1934 decree issued by the cabinet of Turkey's secularist founder Kemal Ataturk converting Hagia Sophia into a museum. The move was not particularly well-received abroad. Austria, France, Greece, Cyprus, Russia and the United States were among the countries that expressed regrets over Ankara's decision, while Turkey views the matter as an internal affair.

VIDEO | Some of the attendants at Hagia Sophia started chanting 'Allahu Akbar' during the first official prayer #SputnikLive pic.twitter.com/6repkcElpq