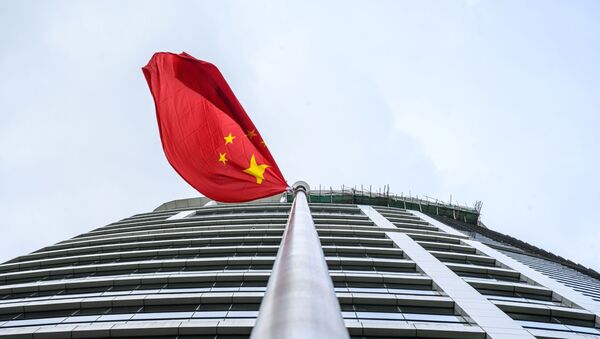 © AFP 2021 / Anthony WALLACE
Subscribe
Relations between the United Kingdom and the People's Republic of China are turning increasingly sour, as London has introduced new eased routes to citizenship for nearly three million residents of Hong Kong.

The Chinese foreign ministry threatened to end its recognition of British National Overseas (BNO) passports held by residents of Hong Kong in response to the former colonial power's policy of opening up increased pathways to UK citizenship.

A spokesman echoed China's position Thursday, saying the move by the UK was an act of interference in its internal affairs.

“As the English side is the first to violate the promise, China will consider not recognising BNO passports as a valid travel document, and reserves the right to take further measures", Wang Wenbin told a news briefing.

However, China already does not recognise BNO certificates as a valid travel document. Instead, residents of Hong Kong - which was handed back to China in 1997 - are required to apply for travel permits when traveling to the mainland.

London has introduced a policy that would allow nearly three million Hong Kong residents to live in Britain as citizens in response to a new security law from Beijing that opposition groups claim violates the 1 country, 2 systems arrangement.

The Chinese government has stressed that the new law is in compliance with the 1997 Basic Law, which allows for the introduction of legislation that outlaws foreign meddling.

“The Chinese side urges the British side to recognise the reality that Hong Kong has returned to China, to look at the Hong Kong national security law objectively and immediately correct its mistakes”, China’s embassy in London said on Thursday.

The move comes amid a souring relationship between Britain and China, which has seen Westminster go back on its agreement to permit Chinese tech giant Huawei to help build its 5G network.

Foreign Minister Dominic Raab announced on Monday that the UK would be suspending its extradition arrangements with Hong Kong "immediately and indefinitely".

"The specific measures I have announced today are a reasonable and proportionate response to China's failure to live up to those international obligations with respect to Hong Kong".@DominicRaab announces new measures in response to China’s new National Security Law pic.twitter.com/WtTM80KHqD

​Britain also agreed this month to send its aircraft carrier the HMS Queen Elizabeth to join US warships in the Pacific to partake in military exercises, which was met with fury from the Chinese government.

Hong Kong was torn away from China by the British at the end of the First Opium War in 1842 and later obtained a 99-year lease in 1898, which would grant the territories back upon its expiration.

000000
Popular comments
Due to the British drug lord : )
r8106990
24 July 2020, 06:17 GMT7
000000
Hong Kong always was part of China and the British were invader occupiers. The lease has expired so enough of this UK BS or would you prefer that China invades your country and leases it for 99 years. So, the Empire is old hat, go home and stop crying.
amike
24 July 2020, 08:19 GMT7
000000
Newsfeed
0
New firstOld first
loader
LIVE
Заголовок открываемого материала
Access to the chat has been blocked for violating the rules . You will be able to participate again through:∞. If you do not agree with the blocking, please use the feedback form
The discussion is closed. You can participate in the discussion within 24 hours after the publication of the article.
To participate in the discussion
log in or register
loader
Chats
Заголовок открываемого материала
Worldwide
InternationalEnglishEnglishMundoEspañolSpanish
Europe
DeutschlandDeutschGermanFranceFrançaisFrenchΕλλάδαΕλληνικάGreekItaliaItalianoItalianČeská republikaČeštinaCzechPolskaPolskiPolishСрбиjаСрпскиSerbianLatvijaLatviešuLatvianLietuvaLietuviųLithuanianMoldovaMoldoveneascăMoldavianБеларусьБеларускiBelarusian
Transcaucasia
ԱրմենիաՀայերենArmenianАҧсныАҧсышәалаAbkhazХуссар ИрыстонИронауОssetianსაქართველოქართულიGeorgianAzərbaycanАzərbaycancaAzerbaijani
Middle East
Sputnik عربيArabicArabicTürkiyeTürkçeTurkishSputnik ایرانPersianPersianSputnik افغانستانDariDari
Central Asia
ҚазақстанҚазақ тіліKazakhКыргызстанКыргызчаKyrgyzOʻzbekistonЎзбекчаUzbekТоҷикистонТоҷикӣTajik
East & Southeast Asia
Việt NamTiếng ViệtVietnamese日本日本語Japanese俄罗斯卫星通讯社中文（简体）Chinese (simplified)俄罗斯卫星通讯社中文（繁体）Chinese (traditional)
South America
BrasilPortuguêsPortuguese
NewsfeedBreaking
06:10 GMTThe Bennett-Lapid Government's First 100 Days: What Promises Have They Broken?
05:52 GMTPowerful Earthquake in Australia Damages at Least 46 Buildings
05:42 GMTUK Reportedly Mulls Joining US-Mexico-Canada Trade Deal as FTA With America Stalls
05:24 GMTBrazilian Health Minister, Who Arrived at UN, Says Contracted COVID-19
04:30 GMTA Sigh That Tells It All: Golden Retriever Wants Attention
04:28 GMTLive Updates: Germany Registers 10,454 New COVID-19 Cases
04:11 GMTFlorida Gov. Orders All State Agencies to Search for Laundrie After Petito's Remains Confirmed
03:43 GMT'Nothing New on That': Bill Gates Brushes Off Question About His ‘Dinners’ With Epstein
03:33 GMTGOP Politicians Stand by US Border Patrol After Claims They 'Whipped' Refugees at Rio Grande River
03:14 GMTPele Cheers Up Fans by Posting Video of Him Riding Exercycle in Hospital
03:07 GMTAxis of Resistance Killed US, Israeli Commanders in Revenge for Soleimani's Assassination - Report
02:56 GMTPolitical Capital & GOP in His ’Grip’: Trump ’Wants Back’ in 2024, Journos Say
01:43 GMTIRGC Chief: Iran No Longer Sees US as Threat - Report
01:18 GMTChinese Covid Vaccines Reach 100 Nations, But WHO Warns Africa Still Short 470 Million Shots in 2021
01:04 GMTAwkward Moment as White House Staff Cuts Off Biden-Johnson Meeting in Mid-Sentence
00:20 GMTVideo: Military Jet Intercepts Small Aircraft Over NYC in the Middle of UN General Assembly
00:19 GMTPark Ranger ‘Implored’ Gabby Petito to Distance Herself From Toxic Relationship With Brian Laundrie
YesterdayVideos: 6.0 Earthquake Strikes Southeastern Australia
YesterdayPro-Reunification Candidate Chang Ya-chung Edges Ahead as Chairman Election in Taiwan’s KMT Nears
YesterdayTexas Governor Vows to Prevent Del Rio Migrant Surge Disaster From Being Replicated