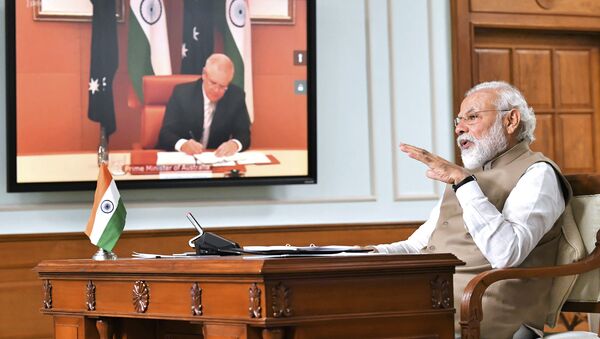 © AP Photo / Press Information Bureau
Subscribe
New Delhi (Sputnik): The COVID-19 outbreak has not only changed work culture, it has also highlighted the importance of having fresh and diversified skill sets. Meanwhile, joblessness in urban areas has climbed to above 11%, according to a Centre for Monitoring Indian Economy (CMIE) survey published last week.

Prime Minister Narendra Modi has stressed the need for people to adopt different skill sets in order to survive and prosper during the economic crisis caused by the coronavirus pandemic. The Indian premier was speaking about employment as part of World Youth Skills Day on 15 July.

“Learning new skills, reskilling and upgrading one’s skills are the demands of the times we are living in. People ask me that in these times when businesses and markets are changing so fast, how should we stay relevant. This question is even more important during this COVID-19 pandemic. Mantra to be relevant is to skill, reskill and upskill”, said Modi.

Modi’s words come at a time when the Indian workforce is facing a crisis due to the pandemic. Since March, thousands of people have lost their jobs in previously booming sectors including IT, automobile manufacturing and media.

The government emphasized job creation in its 2020 budget with the aim to create a $5 trillion economy, but due to the pandemic, the Indian economy has seen falling demand for goods and services, pushing it towards recession.

Economists at Bank of America Securities last week predicted a contraction of up to 7.5 percent in Indian GDP this financial year.

Meanwhile, the Confederation of Indian Industry (CII) predicts that up to 100 million jobs are at risk, while according to a Centre for Monitoring Indian Economy (CMIE) survey last week, joblessness in urban areas has climbed to 11.26%.

According to the CMIE, over 122 million people in India lost their jobs in April. The small traders and wage-labourers category lost more than 90 million jobs alone. Other impacted sectors include hospitality, travel and aviation.

However, with massive change in the market due to the pandemic, there is a demand for professionals in e-commerce, education, and other technology-savvy sectors, which requires completely different skill sets.

At the beginning of the COVID lockdown in March, the Indian government urged companies to refrain from layoffs and pay-cuts. The Indian Ministry of Home Affairs issued an order on 29 March that all employers should pay wages to their employees on the due date “without any deductions” during the lockdown period. Prime Minister Modi had made similar appeals.

000000
Popular comments
This guy is talking rubbish, at the same time thousands of doctors and scientists have come out against Fauci’s lockdowns including Nobel Prize-Winning Biophysicist Professor Michael Levitt, who says that the lockdowns were motivated by panic rather than science, hi is not just a Nobel price winner, and contrary to Fauci who's never really practised medicine, this guy is still working as a biophysicist.