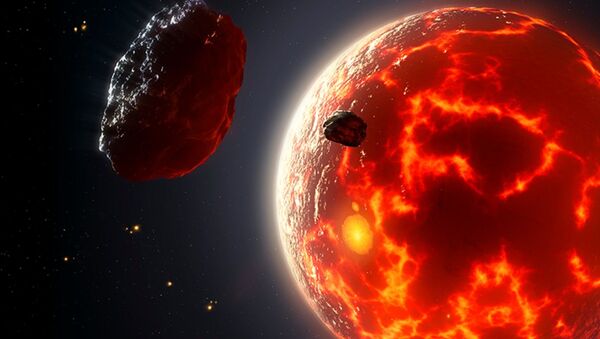 The new research postulates that the molten magma that covered the moon upon its formation took "almost 200 million years" to solidify into mantle rock.

A team of researchers from the German Aerospace Center (DLR) and the University of Munster has established that the moon apparently formed tens of millions years later than it was originally believed, phys.org reports.

As the media outlet points out, even though “most scientists” do agree on how the moon came into being, the exact details of this process and its timing are a whole different matter.

"The results of our latest modeling suggest that the young Earth was hit by a protoplanet some 140 million years after the birth of the solar system 4.567 billion years ago," said Maxim Maurice, corresponding author of the new study. "According to our calculations, this happened 4.425 billion years ago—with an uncertainty of 25 million years—and the moon was born."

Previous assumptions about the moon's formation “were based on an age of 4.51 billion years", the media outlet notes, while the team's calculations place the collision event in question some 85 million years later.

The material that was ejected into space from Earth during the collision then settled into a ring of dust around our planet, eventually coalescing into what eventually became the moon, with study co-author Doris Breuer from DLR Institute of Planetary Research saying that “the moon was formed in a short time, probably in just a few thousand years".

Upon formation, the moon apparently ended up covered by a magma ocean over a thousand kilometers deep, with the researchers managing to determine how long it took the magma to solidify completely, via computer modeling.

"The results from the model show that the moon's magma ocean was long-lived and took almost 200 million years to completely solidify into mantle rock," said Maurice, while his co-author Nicola Tosi noting that "older models gave a solidification period of only 35 million years."

"This is the first time that the age of the moon can be directly linked to an event that occurred at the very end of the Earth's formation, namely the formation of the core," added Thorsten Kleine from the Institute of Planetology at the University of Münster.