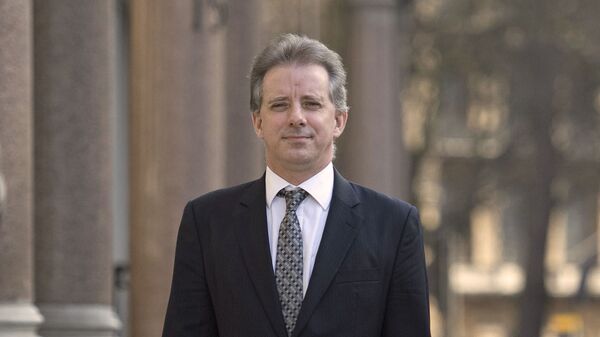 Ilya Tsukanov
All materialsWrite to the author
Christopher Steele, the former MI6 agent-turned FBI informant and Fusion GPS contractor who wrote the ‘Trump-Russia’ private intelligence report for the Clinton campaign in 2016, has seen his professional reputation slide as both the US and British intelligence communities have sought to distance themselves from him.

A London court has ordered former MI6 intelligence officer Christopher Steele to pay £18,000 pounds (roughly $22,600) in damages to Russian bankers Mikhail Fridman and Petr Aven for failing to verify claims he made in his now infamous 2016 dossier on billionaire mogul Donald Trump’s suspected ties to Russia.

In the private intelligence report, Steele claimed, without verification, that the oligarchs had transferred “large amounts of illicit cash” to Vladimir Putin in the 1990s, before he was president, and that the men went on to give him foreign policy advice, including to meddle in US elections.

Justice Mark Warby of the High Court of England and Wales ruled in the bankers’ favour after determining that the Putin payments allegations “clearly called for closer attention, a more enquiring approach and more energetic checking,” something Orbis Business Intelligence, Steele’s London-based private intelligence firm, had “failed” to do.

The compensation to Fridman and Aven was ordered based on the UK’s data privacy laws and “the loss of autonomy, distress and reputational damage” the men were thought to have suffered as a result of the Steele report’s unverified claims.

Commenting on the decision, Fridman said he was happy that “we have finally succeeded” in proving that the claims made by Steele were untrue.

Aven and Fridman took Steele to court in April, asking for damages and for the ex-spook to admit to the world that his report was inaccurate and damaging.

The 35-page Steele dossier, published a week before Donald Trump’s inauguration in January 2017, contained explosive claims about the then-president elect, alleging that Russian intelligence had compromising information on him, and that the Kremlin and Trump had “extensive” secret backchannels. These communications allegedly supported the mogul’s bid for the presidency. Steele also alleged that Trump had colluded with Russia in an attempt to sink Hillary Clinton’s presidential bid.

FBI Refuses to Release Documents on Source Who Repudiated Steele Dossier
Despite being thoroughly discredited almost immediately after being leaked, the Steele Dossier became a major component of the Democrats’ three-year long campaign accusing Trump of colluding with the Russians. Those claims, conclusively debunked with the release of the Mueller report in April 2019, have continued to resonate among many of Trump’s opponents.

Hired as an FBI informant at around the same time that he was working on his Trump report in 2016, Steele’s dossier claims were taken seriously by agency director James Comey, who aggressively pushed the report to serve as part of the basis for the covert surveillance of Trump campaign officials.

In 2019, documents released under the Freedom of Information Act detailed how the FBI eventually began questioning Steele’s credibility, before ultimately firing him on November 1, 2016 after he was caught leaking information to the news media.

Last October, US media reported that MI6, Steele’s former employer, had warned the FBI that Steele had a penchant for showing questionable judgement.

Shock Horror! May and Johnson Ignored Steele's Claims of Russia's 'Likely Hold' Over Trump
In April 2020, footnotes from the Justice Department Inspector General’s report on the FBI’s surveillance of the Trump campaign concluded that Steele had been hoodwinked by Russian intelligence and been fed disinformation which ended up making its way into his dossier.

Despite the public relations disaster, Steele has continued his ‘private intelligence’ gathering work, recently contributing a report on China’s alleged targeting of high-profile figures in the UK’s political establishment to manipulate them into supporting Huawei’s efforts to expand its business in Britain. Huawei categorically rejected the claims, suggesting they are part of a US-sponsored influence operation against the Chinese company.