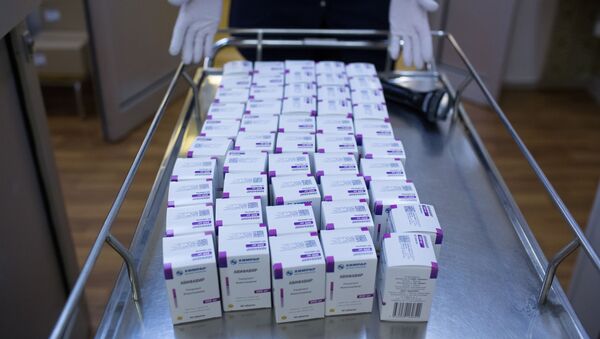 © REUTERS / Handout .
Subscribe
International
India
Africa
BUENOS AIRES (Sputnik) - The Russian embassy in Guatemala together with the Russian Direct Investment Fund will hold a presentation of the Avifavir medication against COVID-19 for Latin America and the Caribbean on 10 July, the embassy said on Wednesday.

"To develop the issue of the fight against coronavirus, the embassy together with Kromis, the joint venture by ChemRar and the RDIF, which launched the Avifavir drug against coronavirus in the Russian market, is organizing its presentation for Latin America and the Caribbean. Representatives of all supranational parliaments of the region, specialized agencies, and committees are invited to participate in the conference", the embassy said.

Earlier this week, the Russian Ministry of Industry and Trade received requests for the supply of Avifavir from the Commonwealth of Independent States member countries, Latin American, European, and Southeast Asian countries.

Avifavir, the first Russian drug against COVID-19, produced by RDIF and ChemRar, was approved by the country's Health Ministry in late May. It has proven 90 percent effective in treating the coronavirus disease during trials.