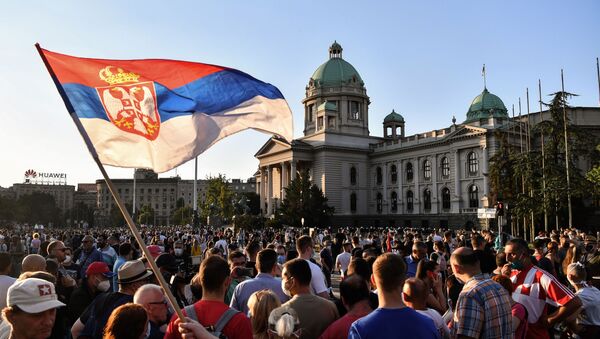 BELGRADE (Sputnik) - More than 1,000 protesters have gathered in the centre of Belgrade on Wednesday following riots that occurred in the capital city after Serbian President Aleksandar Vucic announced plans to impose new restrictions to fight the COVID-19 outbreak, a Sputnik correspondent reported.

Late Tuesday, the Serbian president revealed plans to impose new restrictions to curb the spread of COVID-19, including the same curfew that had been enforced during the March-May state of emergency. This prompted a clash between protesters and the police outside of the country's parliament, with 43 officers and 20 citizens injured, and 24 protesters arrested. Five police vehicles were also burned down during the night. Vucic called Tuesday night's riots the most flagrant case of political violence in several years.

The fresh rally has been organized by a group of Serbian opposition parties, including the Alliance for Serbia coalition, which boycotted the parliamentary elections held in the country on June 21. The opposition accuses the government of holding the vote amid the ongoing COVID-19 pandemic, as well as of authorizing many sports and other events where it was impossible to observe social distancing measures. Vucic has so far denied all charges.

The correspondent said that people were continuing to join the ranks of protesters. Among the newcomers are young people, middle-aged citizens and representatives of the older generation, some of whom brought national flags.