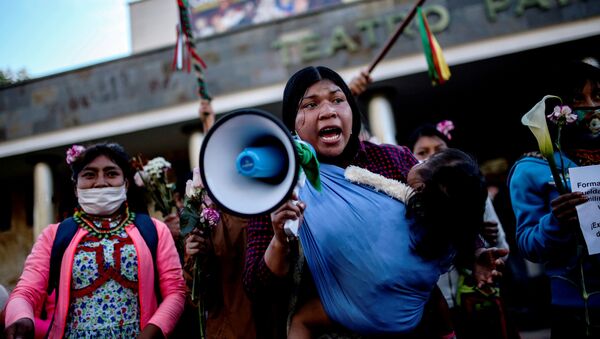 The rapes of two young, Indigenous girls by soldiers in rural Colombia have shed light on the role that the US plays in expanding and training the Colombian military, two activists told Sputnik.

Nathalie Hrizi, an educator, a political activist and the editor of Breaking the Chains, told Radio Sputnik’s Loud & Clear on Tuesday that the sexual assaults of the two minors highlight a continued pattern of abuse at the hands of Colombian service members.

“Essentially, these two rapes have raised attention to what is a pattern in Colombia and a pattern associated with the human rights abuses and violations of the Colombian military,” Hrizi told show host Nicole Roussell.

“And so there have been protests … really, the Indengeous community are those that have been organizing.”

One of the assaults involved an 11-year-old girl from Colombia’s Embera tribe and has since seen seven soldiers from an army garrison in western Colombia arrested after admitting to the minor’s abduction and rape.

The second case was revealed in recent weeks by the Peace and Reconciliation Foundation, a Colombian think tank, which detailed the September 2019 abduction and repeated rape of a 15-year-old from the country’s Nukak Maku tribe. Both assaults have led to widespread protests across Colombia.

Speaking to Radio Sputnik’s Loud & Clear on Tuesday, Hrizi explained that the Embera tribe is located in an autonomous territory near a military station.

“That rape has been really, in the eyes of the public, connected to another rape that happened in September to another Indigenous girl in a different area. She’s a 15-year-old girl in the Guaviare area,” Hrizi explained.

“On September 8, soldiers abducted her, and they kept her for five days … they raped her and denied her food and water … that has not really received any real widespread acknowledgment until more recently because of the way the Colombian military is organized,” Hrizi added.

Since 2016, at least 118 members of the Colombian army have been investigated over accusations that they sexually abused minors, Colombian General Eduardo Zapateiro revealed on July 1, Reuters reported. The Colombian army, which has battled for decades against leftist guerilla forces, as well as criminal gangs formed by former members of right-wing paramilitary groups, has long been accused of human rights violations.

It’s important to note “the power of this Indigenous protest movement and the really important ways in which that movement is drawing connections between violence against women and broader abuses of power, whether at the hands of the military, police, rich people or otherwise, and that very much includes the role of the US in expanding and training the Colombian military,” Hannah Dickinson, an associate professor at Hobart and William Smith Colleges and an organizer with the Geneva Women’s Assembly, told Sputnik.

According to a report by Defense News, the US military has helped train Colombia’s soldiers for decades, despite widespread condemnation of human rights abuses by the Colombian military.

“In 1999, the US aid to Colombia jumped from $3 billion to $7.5 billion, and civic and human rights organizations in Colombia have been documenting cases of sexual violence against Indigenous women for the past 12 years,” Dickinson explained.