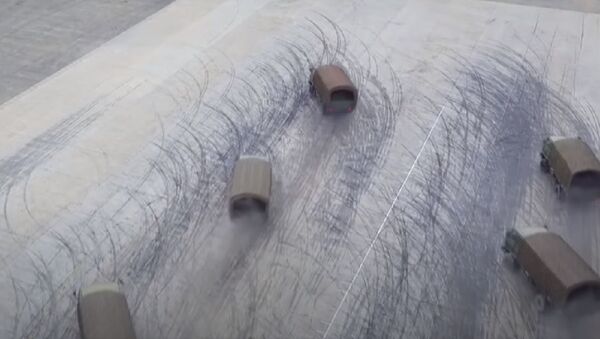 New Delhi (Sputnik): News updates about the intense India-China face-off in the Ladakh region, which has been ongoing for over a month, made international headlines throughout June. What hasn’t been spoken of as much is the serious war between the Asian giants heating up by the minute on Twitter.

A video of Chinese military trucks and jeeps drifting smoothly on what appears to be an icy surface before parking in absolute symmetry has gone viral on social media.

The clip, originally posted by Chinese newspaper People’s Daily on its website, was intended to flex the precise driving skills of Chinese Army personnel.

​Some Indians, however, were not impressed.

Reacting to the Chinese video, a section of Indians began posting videos showing the driving, parking, shooting, and all other sorts of skills that their countrymen are capable of. The clips posted by Indians also come with witty captions, some of which are hilarious and some could be termed rather offensive.

From tractor tricks on the farm to blindfolded Indian soldiers assembling rifles and vehicles within seconds - netizens from India thought: "rotate all you want, our kids perform these kinds of tricks in our local fun fairs”.

Bi*ch pls... Our Farmers even do better... pic.twitter.com/e3N5fQlY2G

Check out how INDIAN 🇮🇳 soldiers assemble rifles and pistols in 55 seconds while blindfolded...🥰

Hahaha be r break and modified these type a jokes..🤣🤣🤣🤣 pic.twitter.com/BwZC8JkOvG

​Meanwhile, China's state-run daily the Global Times recently shared a video on Twitter showing Chinese soldiers posted at the Line of Actual Control (LAC) practicing their “sleep training”. The footage, with a TikTok watermark, showed a group of Chinese troopers sleeping with their guns suddenly swinging into action just when they felt that their weapons were being snatched.

​Riding on the anti-China sentiment since the recent deadly clashes between the two armies, some Indians trolled the Chinese soldiers for “overacting”, calling them a TikTok Army.

On the intervening night of 15-16 June, Indian and Chinese troops engaged in a violent clash in Ladakh, leaving 20 Indian soldiers dead. Following the deadly face-off, the two sides conducted several rounds of negotiations to de-escalate tensions in the disputed region and agreed to disengage from friction points.