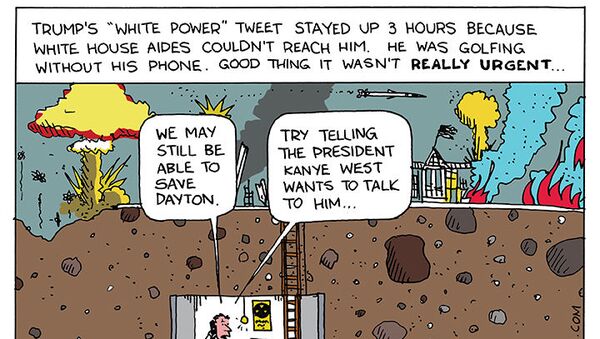 Reports have surfaced of White House staffers frantically trying to track down US President Donald Trump over the weekend to get him to delete his retweet of a video in which a man yelled “white power,” but Trump wasn’t answering his phone while partying it up on the green at his Virginia golf course.

The president is not a stranger to saying and tweeting incendiary things. The divisive footage that Trump retweeted Sunday showed a supporter of his, who happens to be a white man, driving a golf cart and yelling “white power” at a group of protesters.

The video remained on Trump’s Twitter account for more than three hours as White House staff repeatedly tried to reach out to him to tell him to delete it, two officials told NBC News. According to the sources, the president was at his golf club in Virginia and was not checking his phone during that three-hour time period.

According to the report, they also tried to contact Deputy Chief of Staff for Communications Dan Scavino to tell him to delete the retweet, but they were unable to reach him. Once White House officials managed to contact Trump, he agreed to remove the video from his Twitter page.

According to White House Press Secretary Kayleigh McEnany, Trump did watch the video before sharing it; however, he did not hear his supporter yell "white power."