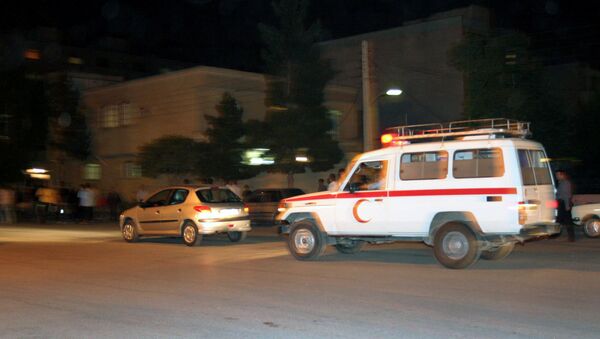 An explosion and fire in a medical facility in the north of the Iranian capital killed 18 people, according to Press TV.

Earlier, the head of Tehran's ambulance service, Peyman Saberian, told Fars news agency that the death toll from the blast was 13.

People have been sharing videos on social networks of a building on fire - reportedly the Sina Athar Medical clinic.

There's not yet any official information on the cause of the incident or on possible casualties.

2nd attack in a single day in Iran.

The cause of the explosion is still unknown but attackers hit Sina Athar hospital, casualties also reported.#Iran #Tehran pic.twitter.com/5tpEBjZbLH

Commenting on the incident, Jalal Maleki, the Tehran Fire Department spokesman, said as quoted by the Tasnim news agency that a fire had broken out in a medical clinic and firefighters have been sent to the scene.

According to Iranian Fars News Agency, preliminary suspicions indicate that an oxygen tank was behind the blast.

The explosion occurred in the underground floors of the building which caused smoke to rise up through the floors, the agency reported, adding that firefighters have been able to localize the fire.

The incident comes several days after a large explosion occurred east of Tehran. According to the Iranian Defense Ministry spokesman, the incident was a gas tank explosion with no casualties being reported.

000000
Popular comments
2nd attack in a single day???! ... what was the first one? The second one I can tell you, was result of a lab accident that caused fire in a medical center. ................... Looks like Hasbara day dreaming again while Iranian sub marines fine-tuning manoeuvres at shores of the occupied Palestine.

UncleFidel
30 June 2020, 20:25 GMT4
000000
Nothing much to think about - the jews from palestine of course. Iran needs to up the anti-spy campaign. The jew spies have infested the Middle East and need to be cleared out once and for all!
mandrake
30 June 2020, 21:02 GMT3
000000
Newsfeed
0
New firstOld first
loader
LIVE
Заголовок открываемого материала
Access to the chat has been blocked for violating the rules . You will be able to participate again through:∞. If you do not agree with the blocking, please use the feedback form
The discussion is closed. You can participate in the discussion within 24 hours after the publication of the article.
To participate in the discussion
log in or register
loader
Chats
Заголовок открываемого материала
Worldwide
InternationalEnglishEnglishMundoEspañolSpanish
Europe
DeutschlandDeutschGermanFranceFrançaisFrenchΕλλάδαΕλληνικάGreekItaliaItalianoItalianČeská republikaČeštinaCzechPolskaPolskiPolishСрбиjаСрпскиSerbianLatvijaLatviešuLatvianLietuvaLietuviųLithuanianMoldovaMoldoveneascăMoldavianБеларусьБеларускiBelarusian
Transcaucasia
ԱրմենիաՀայերենArmenianАҧсныАҧсышәалаAbkhazХуссар ИрыстонИронауОssetianსაქართველოქართულიGeorgianAzərbaycanАzərbaycancaAzerbaijani
Middle East
Sputnik عربيArabicArabicTürkiyeTürkçeTurkishSputnik ایرانPersianPersianSputnik افغانستانDariDari
Central Asia
ҚазақстанҚазақ тіліKazakhКыргызстанКыргызчаKyrgyzOʻzbekistonЎзбекчаUzbekТоҷикистонТоҷикӣTajik
East & Southeast Asia
Việt NamTiếng ViệtVietnamese日本日本語Japanese中国中文Chinese
South America
BrasilPortuguêsPortuguese
NewsfeedBreaking
06:02 GMT'Johnson's Not Above the Law': Labour Asks Police to Probe Alleged No 10 Parties Amid 2020 Lockdown
05:28 GMT'People's Republic of Comedy': Lithuanian MP Blasts China Amid Taiwan Spat
04:01 GMTTwitter Admits to Erroneously Suspending Accounts Amid a Slew of 'Coordinated and Malicious' Reports
03:41 GMTWorld Must Not Blame Africa for Undervaccination While Denying Continent Shots - Expert
03:32 GMTUS Intel Accuses Russia of Planning 'Multi-Front Offensive' Against Ukraine as Early as 2022
03:30 GMTMeet Mehmet: Dr. Oz Vying for US Senate in Pennsylvania After Trump-Endorsed Candidate Drops Out
01:45 GMTIsraeli ‘Pegasus’ Spyware Used to Hack Phones of 11 US Diplomats - Reports
01:35 GMTColorado Store Shooting Suspect Found Incompetent to Stand Trial - Reports
00:59 GMTAstronomers Spot Ultra-Dense Exoplanet Seemingly Made of Solid Iron Orbiting Nearby Star
00:41 GMTMillions Remain Long-Term Unemployed Despite Big Decline in November US Jobless Rate
00:30 GMTA Failed Biennial World Cup Could Lead to New Global Tournament
YesterdayJan. 6 Panel Postpones Jeffrey Clark Deposition Over Medical Condition
YesterdayExplosive & Nearing Dominance: What the Data Out of South Africa is Telling Us About Omicron
YesterdayOklahoma Suing Biden Admin to Exempt National Guard From Pentagon's COVID-19 Vaccine Mandate
YesterdayUS States of Maryland, Pennsylvania Confirm First Omicron Variant Cases - Statements
YesterdayGroup-IB Founder's Case Linked to Leakage of Data From Alleged GRU Hackers - Reports
YesterdayArmed Man Arrested Outside UN Charged With Making Terroristic Threat - NYPD
YesterdayMacron Postures as Peacemaker Between Lebanon, Gulf Nations After Selling UAE Fighter Jets
YesterdayUS Ends Vienna Talks, Says Iran Not 'Serious' About Meeting JCPOA Compliance Standards
YesterdayDeSantis' Idea to Create Civilian Militia He Would Control Triggers 'Gestapo' Associations Online