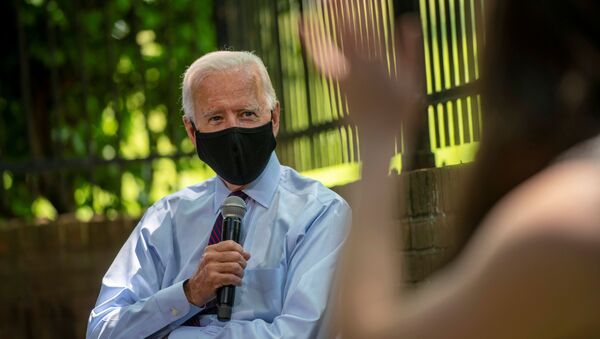 The potential reasons for Biden's lead are numerous – to name but two major factors, Trump has been penalised by American voters for his perceived heavy-handed response to the protests which erupted nationwide in the wake of the murder of George Floyd by Minneapolis police officers in May, and management of coronavirus pandemic.

Democratic Presidential Nominee Joe Biden has a significant lead over President Donald Trump in the polls – 50.9 percent to 41.3 percent, according to the latest figures.

Some have dismissed the significance of Biden’s current lead, pointing out Hillary Clinton also led in all polls in the months prior to the 2016 election, and went on to suffer a humiliating defeat. However, analysis by pollsters indicates Clinton’s lead was typically considerably smaller than Biden’s whopping nine percentage points, and in any event could be attributable to faulty polling methodology employed by the firms conducting and publishing surveys of public political sentiment.

In any event, while Trump managed to transform his overall popular vote loss into a win via the US’ controversial electoral college system, if Biden’s present lead was to maintain until and repeat on election day itself, it’s inconceivable the Oval Office occupant could repeat the same trick again.

Anyone really believe the polls? pic.twitter.com/4vbks9J3w7

​Moreover, while the vote remains over four months away, a veritable eternity in politics, and anything could happen in the intervening time, let alone election day itself, Biden has a secret weapon up his sleeve that makes this year’s election very different from the last – namely, he’s not as widely and viscerally disliked as Clinton was among Republicans, Democrats and  independents.

Polls aggregated by RealClearPolitics found 45 percent of those surveyed had a favorable view of Biden and 46 percent an unfavorable view – a mixed picture indeed, but a stark contrast to Clinton’s standing at the same stage of the 2016 campaign, when she was viewed favorably by 40 percent, unfavorably 55 percent.

Trump managed to exploit this unpopularity very effectively, making the election an effective personality contest between him and his opponent, making much of ongoing scandals surrounding her, such as the FBI’s investigation of her private emails, and painting her as a criminal. Negative catchphrase chants such as “lock her up” became an indelible staple of Trump’s every campaign event, widely shared by the mainstream media and on social networks. Even many voters who didn’t like either candidate came to view her as the greater of two evils.

When even @FoxNews polls show Trump way behind Joe Biden, you know Trump’s got to be terrified. 😱 pic.twitter.com/dkV3pGPZaY

​Conversely, Biden lacks most of the baggage Clinton was struggling to carry when she became Democratic nominee, and simply isn’t a good enough villain for his character and history to become a focal point of the campaign. While prone to gaffes, it's furthermore unlikely Biden will claim to carry a bottle of hot sauce around with him at all times, ala Beyonce.

While Biden isn’t massively popular even in Democratic circles, with some voters considering him too centrist and too willing to compromise, given intense national discussions about the pandemic, race and inequality, Biden’s caring, empathetic and avuncular demeanour will inevitably be more attractive to liberally-minded Americans than Trump’s bombastic, incendiary rhetoric, particularly in swing states. J. Ann Selzer, an independent pollster in Des Moines, Iowa conducted a recent survey of the state showing Biden and Trump effectively tied there – the President carried it four years ago by nine percentage points in a shock win.