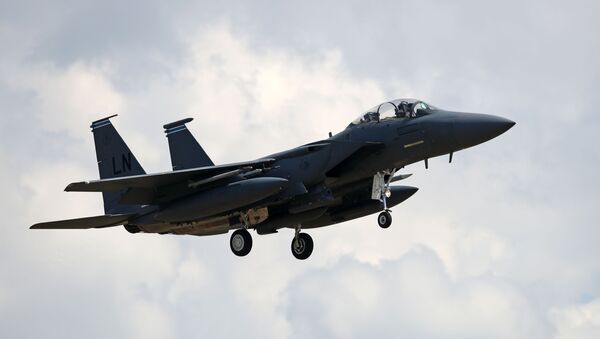 Earlier on Monday, a US Air Force F-15C Eagle plane from RAF Lakenheath, UK crashed in the North Sea off the Yorkshire coast.

The pilot of the US F-15 jet that crashed into the North Sea earlier in the day has been found and confirmed dead, the 48th Fighter Wing said on Twitter.

The pilot of the downed F-15C Eagle from the 48th Fighter Wing has been located, and confirmed deceased.

This is a tragic loss for the 48th Fighter Wing community, and our deepest condolences go out to the pilot's family and the 493rd Fighter Squadron.https://t.co/GwCWFwImaS

It was reported earlier on Monday that the F-15C Eagle came down near Flamborough Head, south of Scarborough, while making a training flight. The cause of the incident is being investigated.

The US Air Force has had a base at RAF Lakenheath, in eastern England, since 1948.

The F-15 Eagle has been a major fighter jet for the US Air Force since the 1980s.

In 2018, media reports revealed that the US Air Force was in negotiations with Boeing over building a replacement for the ageing jet.