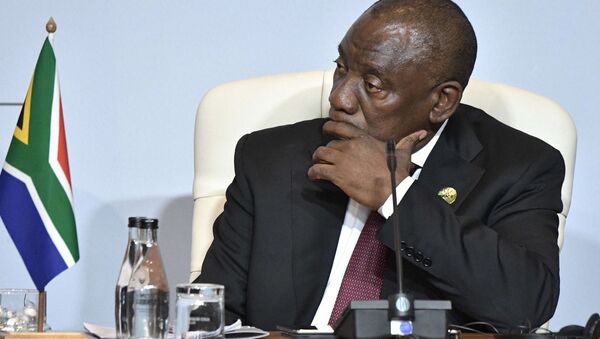 © Sputnik / Алексей Никольский
/
Go to the photo bank
Subscribe
South Africa has been described as “one of the most unsafe places in the world to be a woman” and as the country has entered level 3 of its lockdown which included the ban on the sale of alcohol being lifted, there has been a surge in femicide cases across the nation.

South African President Cyril Ramaphosa described the recent surge in violence against women in his country as “a dark and shameful week” for the nation.

In the past week, several women were brutally murdered in South Africa, including one woman whose body was found dumped under a tree in Soweto on Friday.

In a statement President Ramaphosa said it was disgusting that at a time when the country is facing the gravest of threats from COVID-19,violent men took advantage of the eased restrictions on movement to attack women and children.

He described the murders of Tshegofatso Pule, Naledi Phangindawo, Nompumelelo Tshaka and other women in the Eastern Cape  and Kwa-Zulu Natal whose bodies were found dumped this week, as acts of barbarism and showed a lack of humanity.

Tshegofatso Pule was eight months pregnant when she was found stabbed to death and hanging from a tree.

He called for an end to the culture of silence around gender based violence and asked South Africans to report perpetrators to the police.

The President said that South Africa had among the highest levels of intimate partner violence in the world with 51% of women experiencing violence at the hands of their partner.

“In far too many cases of gender-based violence, the perpetrators are known to the victim, but they are also known to our communities."

“That is why we say this is a societal matter, and not a matter of law enforcement alone. Gender-based violence thrives in a climate of silence. With our silence, by looking the other way because we believe it is a personal or family matter, we become complicit in this most insidious of crimes,” President Ramaphosa said.

He said that there had been a surge in gender-based violence and femicide, since the country had entered Level 3 of the coronavirus lockdown in which the ban on the sale of alcohol had been lifted.

For two months South Africa experienced one of the toughest lockdowns in the world. During that period alcohol was banned in an effort to limit domestic abuse, prevent violence and help take the pressure off hospitals.

On Thursday, Police Minister Bheki Cele linked rising crime to the partial lifting of alcohol sales on 1 June, according to the BBC.

President Ramaphosa said he would deploy Ministers and Deputy Ministers to engage with communities on this upsurge in gender based violence so that everyone can work together to prevent the killing of women.

000000
Popular comments
This is the same man who denies attacks against white farmers in South Africa. 30 attacks since 16 June 2020 alone. Over 3600 murders since the cANCer takeover. And now they are crying because there is a food shortage.