Coronavirus in the US: Dr. Anthony Fauci Says Second Wave is ‘Not Inevitable’ 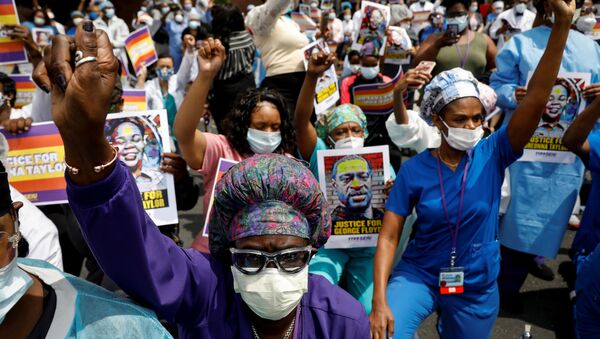 © REUTERS / Brendan McDermid
Subscribe
Coronavirus cases are on the rise in several states and the US Centers for Disease Control and Prevention warns that cases could rise this summer as states reopen. Many experts fear the recent anti-racism protests could contribute to a ‘second wave’ of the virus, however Dr. Anthony Fauci said this may not necessarily be the case.

America’s leading infectious disease expert and White House coronavirus taskforce member Dr Anthony Fauci has said that the US may not see a “second wave” of cases of Covid-19, despite new surges of the virus in several states.

Dr Fauci told CNN on Friday that the recent increase in coronavirus cases in a number of states is not necessarily a "second spike."

“When you start to see increases in hospitalisation, that’s a surefire situation that you’ve got to pay close attention to,” Fauci said.“It is not inevitable that you will have a so-called ‘second wave’ in the fall, or even a massive increase if you approach it in the proper way,” he added, advising people to maintain social distancing and to continue to wear masks in public.

At the time of publication more than 2 million people in the US have tested positive for Covid 19 and at least 114,669 have died from it, according to data from Johns Hopkins University.

This news also comes as the US Centers for Disease Control and Prevention (CDC) published a forecast on Friday predicting that the US death toll could rise to 130,000 by 4 July.

According to analysis by John Hopkins University, over the last week at least 13 states were showing an upward trend in daily cases, while at least 24 states' daily cases declined by more than 10% during the same period.

In New York City, which was once the epicentre of the virus in the US, mass protests have sparked fears of a resurgence of the virus. But new infections there are now at the lowest level in the entire US.

“We were the No 1 state in terms of infection … and now we are the last state in terms of rate of transmission,” New York’s governor, Andrew Cuomo, said on Friday. “That is because New Yorkers stepped up. They were smart. They were disciplined. They did what they had to do, and we need to stay there.”

Meanwhile in states such as Arkansas, numbers have been rising. Arkansas Governor Asa Hutchinson said on Friday that the state had a record number of cases reported in the previous 24 hours.

In Maryland, Baltimore announced that it would not be moving into phase two of planned reopening.

Officials at the CDC said on Friday they are not confirming increases in hospitalizations related to the virus across the country, but that they will "monitor (the situation) very closely.”

Meanwhile former CDC Director Dr. Julie Gerberding, an infectious disease expert, said on Friday that industry's collaborative efforts and the 130 vaccines in different stages of production make her cautiously optimistic the pandemic will end with a vaccine.

"I think the science is on our side, but that doesn't say anything about the speed, the safety, and the durability and all of the other criteria that have to come into play before we have something that we can count on to give us that population immunity," Gerberding said.

000000
Popular comments
He's right, we have just restarted the first wave and continue to perpetuate it with really Stupid Government and even Dumber People!