‘You Are So F**ked’: Probe Launched After US Woman Verbally Threatens Asian Parkgoers - Videos 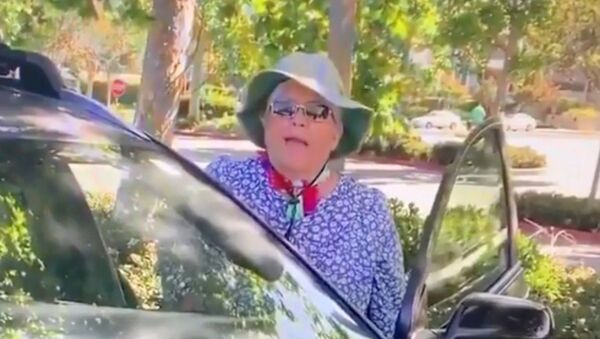 Newly surfaced cellphone footage has prompted police in Torrance, California, to launch an investigation into a local woman after she was filmed on two separate occasions this week launching threatening and racially-charged verbal attacks on Asian parkgoers.

Video of the more recent of the two altercations emerged on Thursday and captured the woman mid-rant against an Asian man who was at the Charles H. Wilson Park with his 11-year-old and 2-year-old sons.

The incident unfolded Wednesday at the recreational area’s designated parking lot after the man questioned whether or not the woman made a racist comment toward him.

“You know what, I am not a racist person. But you know what, you need to go home,” she says as a smile appears to grow on her face. “Go home. I don’t care about your Facebook or your video.”

“Do you know how many people can’t stand you being here? You play games. We don’t play games … I play games where you get f**ked to death,” she continues.

At this point in the recording, the verbally-attacked parkgoer then exits his car to record the woman’s front license plate, a move which prompts the woman to say that she’s going to call the police before she begins to use a mock Asian accent.

“You understand me now, China man,” the woman says without a hint of hesitation.

It’s not until several remarks later that the woman then begins to complain about the man’s driving, saying he’s parked much too close to her vehicle; however, it’s worth noting that video shows the woman is the one who actually parked on the painted lines as opposed to within a designated spot.

Speaking to local news station KTLA, the parkgoer said that he was most disturbed by the fact that the woman decided to unleash her rant against him when he was with his children.

“In 2020, no one should be hearing these kinds of racial slurs,” he said, stressing that minors “need to be protected” from such offensive language.

Unfortunately, that wasn’t the only racially-insensitive encounter involving the woman that unfolded that same day at the park. Video that surfaced on social media on Wednesday captured her going after an Asian woman who was exercising on a staircase at the park.

The second altercation reportedly took place some 30 minutes prior to the parking lot confrontation and only started after the woman appeared to intentionally walk into the woman who was exercising. Seconds after the Asian woman yells out “Jesus,” the unidentified woman goes into a full-blown rant.

After having seen the Wednesday recording, Torrance Mayor Patrick Furey condemned the woman’s behavior and offensive remarks toward the peaceful parkgoers, telling ABC7 that  “conduct like that displayed on the video cannot be tolerated."

Shockingly, those two incidents are not the only ones that have involved the yet-to-be identified offender. After reports began airing about the woman’s outbursts, local resident Kayceelyn Salminoa recognized the woman in the videos and revealed that she too had been in an altercation with her.

Recalling events that took place last October, Salminoa said that the woman in the videos had physically attacked her after Salminoa intervened in a similar rant the woman was launching against a cleaning woman. The woman reportedly shoved Salminoa onto the ground and then grabbed her hair and repeatedly pushed her down after Salminoa attempted to pick herself up.

Salminoa tweeted Wednesday that she filed a police report at the time of the incident, but that nothing had ever come of it. Officials have since indicated that both of the Wednesday incidents are being investigated.