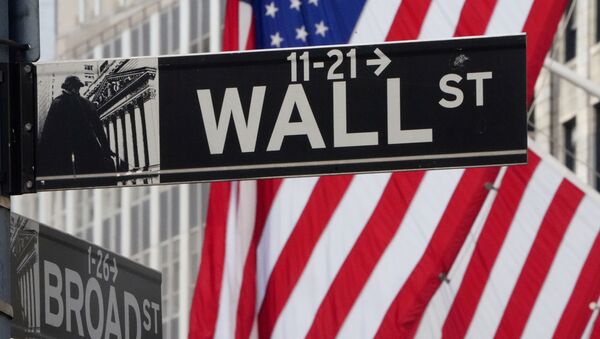 © REUTERS / Carlo Allegri
Subscribe
In Friday's early trade, stocks on Wall Street rose as much as 3 percent, recovering about a third of the previous session’s losses, as broad-based buying helped soothe a market shaken by the fears of the second wave of coronavirus infections in the United States.

US stocks dropped on Friday afternoon, losing all the gains they made during early trading.

Earlier on Friday, stocks on Wall Street rose as much as 3 percent, recovering about a third of the previous session’s losses, as broad-based buying helped soothe a market shaken by the fears of the second wave of coronavirus infections in the United States.

The Dow Jones Industrial Average, the broadest equities gauge on the New York Stock Exchange, was up 2.8 percent at 25,825 points by 10:20 a.m. ET (14:20 GMT), after plunging nearly 7 percent in the previous session.  It was the biggest one-day slump on the index since the Dow’s near-13 percent plunge on March 16.

“As if it wasn't already clear that we're living through extraordinary times - and markets - investors are piling back into stocks after yesterday's plunge,” Craig Erlam at New York brokerage OANDA said in a note to the company’s clients, shared with Sputnik. “Today's rebound is being perceived as a ‘buy the dip’ opportunity.”

Stocks crashed on Thursday as total US Covid-19 cases topped 2 million, with a jump in infections reported in at least five states — New Mexico, Oregon, Florida, Texas, and Arizona — after five weeks of declines across the country. The potential for a second wave of infections from the virus prompted fears there could be another partial shutdown at least of the US economy, which was mostly closed in March and April.

With Friday’s rebound, the Dow remains 10 percent lower on the year while the S&P500 is off 5 percent. Only the Nasdaq is in positive territory for 2020, with a near 8 percent gain.