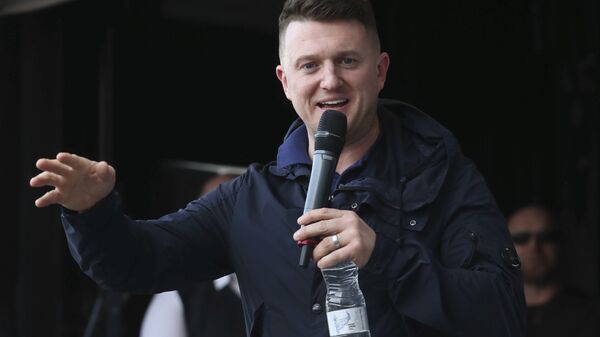 The development comes after demonstrators at a protest against racial discrimination in London last weekend defaced a statue of Winston Churchill, writing “was a racist” beneath the late PM’s name. Black Lives Matter activists also made a list of statues in the UK that they say celebrate racism and need to be pulled down.

Tommy Robinson has blasted the UK police for their soft response during last weekend’s protests against police brutality and racism, which saw 27 law enforcement officers hurt as well as statues and monuments defaced. Robinson, who served as a political adviser to the leader of UKIP, Gerard Batten, called on people to join opposition protests this weekend and criticised the "soft-handed" police response to the demonstrations organised by the Black Lives Matter movement.

His call coincided with a statement issued by the Democratic Football Lads Alliance (DFLA), a self-proclaimed anti-extremist group, which called on its members and other British citizens to protect war memorials at Whitehall, a street in central London recognised as the centre of the UK government.
The group specifically noted that the aim of their action is not to stop or oppose Black Lives Matter demonstrations.

"This is not a march nor is it a counter protest against BLM, we will be making sure the war memorials don’t get desecrated, enough is enough it’s time to defend what our war heroes done for this country and their honour", the group said in a statement on Facebook.

Local media has reported that DFLA members will likely gather near the statue of Prime Minister Winston Churchill and the Cenotaph war memorial.

The development comes after the Black Lives Matter movement compiled a list of 60 statues and monuments in Britain that they say should be removed because they celebrate slavery or are linked to racism. Some of the UK’s most famous figures were included in the list, including Cecil Rhodes, who served as the prime minister of Britain’s Cape Colony. Hundreds of demonstrators gathered at Oxford University last night demanding that his monument be torn down.