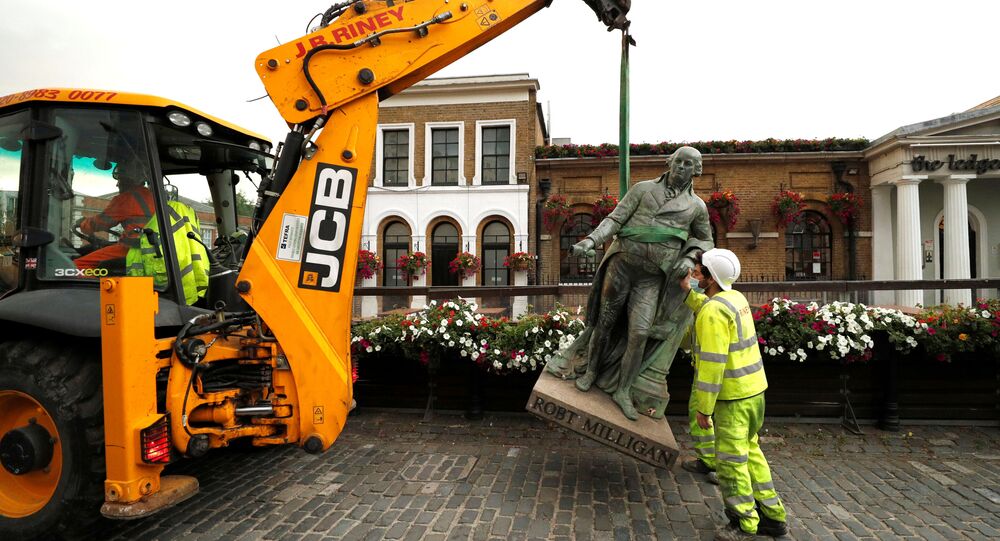 Creation of New History Through Violence Toward Statues

Mark Hoskin - Momentous events taking place last weekend in the UK remind us that the country was a centre of a global economy built on slavery, the trafficking of illicit drugs, and mass inhumanity that many Western countries participated in.

UK ministers, including Prime Minister Boris Johnson, who referred to acts of "thuggery" on social media, have condemned violence at a Black Lives Matter march in London, and the toppling of a statue in Bristol.

These events are part of the continuing protests in Western countries over the killing of George Floyd in the US.

The statue of a slave trader and former Bristol's member of parliament Edward Colston, that has been the target of several initiatives to have it removed over the past few years, was ceremoniously dumped in the dock waters, with a symbolic rope tied around its neck. Bristol Mayor Marvin Rees told the BBC, "Circumstances came to a head at this particular moment in time, and people felt the need to take the statue down".

Sir Keir Starmer, the Labour leader, told the London-based LBC Radio that "it's completely wrong to pull down a statue like that. But that statue should have been taken down a long, long time ago".

Neither politician reverted to name-calling or any form of labelling. They spoke with cautious terms, likely in an attempt to be accepted by people with differing points of view.

Many of the people engaging in recent protests and scenes of violence, including the injury of eight officers outside the US Embassy in London, appear to be young adults.

The likelihood is that none of them was born when former US President Ronald Reagan famously said in West Berlin "Mr Gorbachev, tear down this wall" on June 12, 1987.

In 2003, the second Gulf War, or Iraq War, began, an action now held to have a wrongful basis due to the faulty US and UK claims of weapons of mass destruction. In Firdos Square, central Baghdad, Iraq, the overbearing statue of Saddam Hussein was toppled in the same year, a symbol of his downfall that was beamed around the world. There were no complaints after this event. It was held up as the right of the people to express themselves.

The younger people today who toppled Edward Colston's statue may barely remember it. It is more likely that this event, along with the fall of the Berlin Wall, are simply historical footnotes that are learned in school lessons.

It can be argued that wanton destruction should not be the fate of the public property, which statues generally are. However, the historical reality is that statues are toppled both to make a statement that cannot be ignored, and later viewed historically as a mark of societal change.

© AFP 2021 / ADRIAN DENNIS
A statue of British businessman Cecil Rhodes is seen on the facade of Oriel College in Oxford, on February 5, 2016

In the UK today, there has been over a year of publicity and direct political encouragement concerning events in Hong Kong. Footages of protests that descended into full-scale riots have seen the use of Molotov cocktails, slingshots, and other deadly weapons. While no rioter has been killed to date, a remarkable statistic so far, the property and infrastructure damage has resulted in economic and social issues that will outlive the effects of the current pandemic.

The response to these acts from some Western leaders has been supportive, leading to the creation of relevant laws in the US, and calls for a resurgence of what can only be considered as colonialism, a direct cause of continuation and violent escalation as those participating become immune to the harm they cause others. The society in which we live has sprouted many of the same tendencies among a generation that has grown up with the understanding that such violent acts are lauded at home.

In a historical context, protest, rioting, and statue destruction have been encouraged and publicly supported by American and British politicians when it occurs overseas. As populist viewpoints increase - fueled by social and economic patterns among the younger working generation that are not being addressed by politicians today, there will be unrest that develops into protests that could descend into violence.

The rapidly increasing divisions within society, and the stoking of them by political leaders domestically and internationally to win elections or popularity, are only going to increase domestic incidents of a violent nature in tempo and scale.

The same politicians should therefore not be surprised that these activities can also occur in the current domestic setting. The abhorrent death of George Floyd at the hands of those who are supposed to protect has resonated with so many people around the world. For them now is the time for actions.

The creation of this history is not only marked by violence in protest. It is the call of a younger generation that sees symbols of a colonial past as abhorrent. Yet at the same time, there is an increase of despair when they look toward a future where racist attacks increase, and when they look at the political portrayal of violent protests overseas.

This Article Was Originally Published in the Global Times