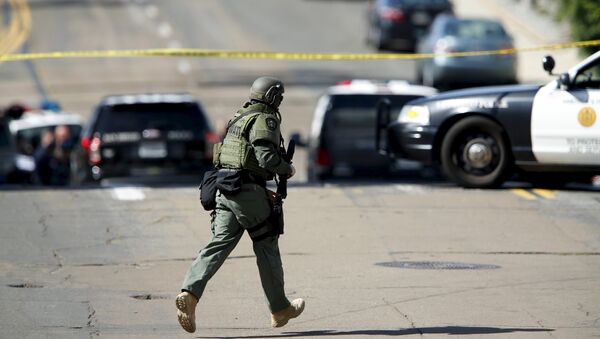 The San Luis Obispo County Sheriff's Office said on Twitter that police officers are searching for an armed man who shot a deputy in Paso Robles at around 3:15 a.m. on Wednesday. According to the officials, the deputy was taken to a local hospital in serious condition.

The sheriff's department has urged people in the area to shelter-in-place while the authorities investigate.

Urgent: Active Shooter situation in Paso Robles.
Searching for armed man who fired at Paso Robles PD this morning.
Deputies & CHP responded to the incident.
One Deputy shot. He is in serious but stable condition.
If near downtown Paso Robles you are asked to shelter in place. pic.twitter.com/7tpZQD4urR

Last week, a sheriff’s deputy was killed and two other officers wounded in Santa Cruz, California.

​On 29 May, a US Federal Protective Service officer was shot and killed in Oakland, California, near the site of a local George Floyd protest.​

Update: Active Shooter situation.
Shelter in place order still in effect for the downtown Paso Robles
Law enforcement searching for armed gunman.
The suspect described as male in 20's or 30's
The wounded Deputy listed in serious but stable condition. Airlifted to a trauma center pic.twitter.com/YR5pez99Bx

The entire downtown area of Paso Robles is under a stay-at-home order as law enforcement searches for the shooter. CHP officers armed with rifles are blocking off roads to form a perimeter around the search area pic.twitter.com/Nfc8k20nff

NEW: Info on Broadcastify says a gunman near the Paso Robles DMV fired 5 shots fired at 2 police offers at 3:55 AM. A deputy who came to help was hit

Correction: the barricade is between 10th and 13th on Spring Street in Paso Robles, focused aound the park. Sheriff’s plane and CHP helicopter still circling overhead. Do not try to come through the area, the scene is very active. pic.twitter.com/0xK9Qn1Gbv