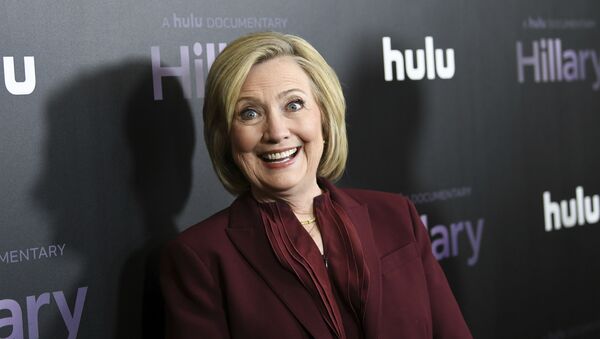 © AP Photo / Evan Agostini
Subscribe
International
India
Africa
Hillary Clinton charged in a recent interview that she had initially expected empathy from President Trump, but claimed he had "too little even to fake it”, with the public promptly reminding her of the way the Obama administration handled the attacks on the US facilities in Benghazi in 2012.

In comments to The Los Angeles Times, Hillary Clinton has launched an attack against her 2016 rival Donald Trump, accusing him of incompetence and poor leadership that she blatantly dubbed "a failure". There was, however, no shortage of individuals ready to oppose the Democrat's view, and to turn the mirror back on her.

"What has been so surprising to me is how he can barely make an effort to rise to the occasion. I truly don't think he can get out of his own way. Everything always has to be about him", Clinton charged, adding that it may well be that such a leader, "who depends upon distraction, has finally been brought down to Earth because people are watching in real time how inadequate his response has been to these historic moments", she went on calling from her home in Chappaqua, N.Y., to talk about the documentary "Hillary" that premiered in early March.

She went on take a dig at Trump over what she says was an attempt to ignore the coronavirus pandemic until the very last moment when he just had to address it, with his response to the raging crisis turning into a "daily rally".

Touching on George Floyd and the subsequent protests against police brutality and systemic racism in the US, Clinton said she had initially expected a tad of empathy from POTUS, but in vain:

"He doesn't have even the minor amount of empathy to fake it, to look like he is concerned, and he reverts to the belligerence and the threat-making and the photo-opping, all the tried and true tactics that feed his need for control and dominance and attention", Clinton fumed, bringing up one of the highlights of the ongoing protests - pictures of President Trump holding the Bible in front of St John's Church near the White House, with the historic building nearly burnt down by George Floyd protesters. Critics said at the time the crowds had been intentionally dispersed with tear gas, but POTUS promptly denied the claims, saying he didn’t give orders to do this.

"It was beyond my comprehension. We have never seen anything like this", she said calling him a figure "without shame".

"It is a mystery why anybody with a beating heart and a working mind still supports him", she said.

The former secretary of state continued to address Democrats’ calls to allow citizens to vote by mail - something the Republicans have continuously been denouncing as a measure that could potentially rig the election saying ballots could end up in the wrong hands.

"The goal of the Trump campaign and the Republican National Committee, which has been stated explicitly, is to stop vote by mail because they believe - and I think rightly - that the more people who vote, the less likely they are to win the White House again, to keep the Senate and also be able to dominate in state legislatures and statewide offices", Clinton noted admitting the battle for nationwide mail voting would be a hard one for Democrats heading into November.

"The protest has arisen from factors out of Trump's control, and Trump has condemned it", one noted.

Another, responding to her remarks about how anyone "with a beating heart" could back Trump, said:

Same as I wonder how anyone with a heart or working mind could be involved in child sex trafficking. She’s as vile and evil as they come.

"She should be worried about going to court more", another remarked, while some others alleged there was "nothing to" her taunting, which has been there since as early as 2016.

Hillary Clinton is still so bitter about 2016. It's really quite pathetic. https://t.co/kpbEglWAFa

ANOTHER PERFECT EXAMPLE: @HillaryClinton continues to be the cause of massive division within our country. Sick woman.

Clinton calls @realDonaldTrump failure in blistering interview, questions how anyone with a beating heart & a working mind supports him https://t.co/Z4t3EDetQq

Many discerned quite a bit of hypocrisy in Clinton’s rant:

This was before Democrats needed to help Hillary by calling Trump a racist pic.twitter.com/SNQlbXzMuG

Hillary Clinton needs to be locked up and protected by Trump’s secret service so she’s not suicided. She could single handedly take down half of the Deep State.

…while a few opted for some hilarious memes and gif-images to illustrate that "Hillary is back":

This woman is so sick. pic.twitter.com/qbnk986ZRk

"If she wasn’t so corrupt people might value her....with her you can’t get past the evil...her looks, her voice is clouded in Satan’s imagine….", someone posted, with many more continuing, including calls to "lock her up":

She is TERRIFIED of Trump. She will go down - HARD... Her time is coming to a close. Trump will bring justice. Soon

Slews of netizens recalled her branding citizens "deplorables" and Clinton’s failure during the Benghazi attack:

Where was her heart and her working mind when #Americans were murdered in #Benghazi? Just want #HillaryClinton to know we will never forget!

Honestly, I wish nature would expire this woman. She let brothers get murdered in Benghazi. I have no human compassion for this vile POS!