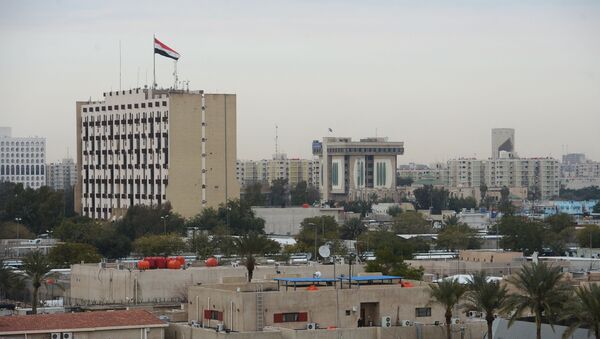 © Sputnik / Sergey Mamontov
/
Go to the photo bank
Subscribe
Israel didn't have another choice but to level Baghdad's nuclear facility that allegedly developed weapons of mass destruction, says a former IDF pilot who led the operation. But the key to survive in the Middle East, he says, lies in the ability to make peace, not to wage war.

In the morning of the mission on 7 June 1981, before taking off in the American F-16 fighter jet that would bomb Osirak, Iraq's nuclear reactor that reportedly developed weapons of mass destruction, Zeev Raz felt no fear. Rather, he was burdened  by the responsibility that lay on his shoulders.

"There was lots of tension. When you are the lead pilot, it is totally different. You don't think about your life or the family you are leaving behind. All you focus on is the logistics and the target."

Located a thousand kilometres away from Israel and 17 kilometres southeast of Baghdad, "the target" was considered a  serious threat for Israel, whose leadership suspected that the weapons of mass destruction allegedly developed there would be used against the Jewish state. Iraq denied these allegations, saying the site was intended for peaceful purposes only.

But getting to the location with eight American jets, each carrying two 1,000 kg bombs, was not an easy task, and Raz together with his team of seven pilots had to overcome a number of difficulties before they could reach the destination.

"When I was called into the office of my commander a year before the operation, the first thing I inquired about was whether we had enough fuel to reach the site."

The trouble was that they had barely enough. Back in 1981, when then-prime minister Menachem Begin made the decision to attack, Israel didn't have the option to refuel in midair, a capability that came only a year later. Nor could they stop en route to Baghdad, as their way lay through states that had no diplomatic relations with Tel Aviv and stopping in one of them would be suicidal.
But postponing the operation was not an option. In 1981, Iraq's nuclear reactor was still inactive but was supposed to turn into "a hot" one a year later. The repercussions of bombing such a site would be devastating for the environment and could potentially claim the lives of many, a price that Tel Aviv was not ready to pay.

"That's why we needed to take the opportunity and attack and I was certain that on our way there or the way out I would need to shoot down a lot of Iraqi jets," recalled Raz.

Yet, he didn't. Despite the fact that the attack was carried out in the middle of the raging Iran-Iraq war that would presuppose a high level of alertness among the Iraqis, their defence system left much to be desired.
The fact that their reactor had been attacked a year earlier by the Iranians, who'd failed to cause it any serious damage, didn't make Baghdad boost the security around it either, a mistake exploited by Israelis.

"They were simply not ready, which was astonishing. I was pretty sure that they would intercept us 15 minutes into the operation or certainly on our way out," explained Raz, whose commanders gave the team some dates and Iraqi money so they could survive in the event of their jets being shot down and the crew captured.

But not only didn't that happen, they also made it safely back to Tel Aviv. The reason for this, believes Raz, was good intelligence coupled with months of excellent training and meticulous preparations and calculations.
The only thing they weren't prepared for was the international rebuke their operation would cause once the strike was exposed to the general public.

Was the Attack Worth It?

Apart from being condemned by the US, Israel's staunch ally, and the UN, which passed a resolution against Tel Aviv condemning it for the attack and the killing of ten Iraqi soldiers and one French civilian, the operation also undermined Israel's relations with France, that has built the Iraqi reactor and drew criticism from the international press, which denounced it as a "sneak attack" and "short-sighted aggression".

For Menachem Begin and his commanders, however, the outcome was worth every penalty thrown their way.
Three days after the bombing, Israel's then-chief of general staff Rafi Eitan sent a letter to the South African minister of defence explaining the stance of the Jewish state.

"We did the deed with iron determination not to allow these crazy Arabs to possess nuclear weapons... we are not perturbed by all 'the righteous souls' that all the crocodiles in South African rivers could not provide with enough tears to wipe out their hypocrisy... there will definitely rise an outcry in the world but the alternative to our existence could have been worse sevenfold," he wrote.

Iraq has never been able to rebuild that reactor and in 2010 the Iraqi government even considered suing Israel over the losses Baghdad had suffered as a result of the strike, plans that haven't materialised.

More important, however, was the fact that it was the first time that the Israeli lawmakers authorised such an operation, setting up a precedent for future governments.

In addition, it was reported that the Jewish state has attempted to sabotage Iran's nuclear programme, claiming Tehran uses the facility to generate a bomb that will be used to eliminate Israel - allegations that the Islamic Republic denies.

"Although I believe that the way to survive in the Middle East is not through bombing but rather through making peace, the way we did in 1979 and 1994," he said referring to the peace agreements with Egypt and Jordan, "I do think the repercussions of not bombing that reactor could have been dire for Israel. Iran is a challenge too and I totally understand why we don't want it to acquire weapons of mass destruction".

000000
Popular comments
KingPuts!, They could start with your house.

kernel.panic999
7 June 2020, 13:14 GMT10
000000
Isnt that what mafia goons always say when whacking some poor guy?
Golem
7 June 2020, 13:34 GMT6
000000
Newsfeed
0
New firstOld first
loader
LIVE
Заголовок открываемого материала
Access to the chat has been blocked for violating the rules . You will be able to participate again through:∞. If you do not agree with the blocking, please use the feedback form
The discussion is closed. You can participate in the discussion within 24 hours after the publication of the article.
To participate in the discussion
log in or register
loader
Chats
Заголовок открываемого материала
Worldwide
InternationalEnglishEnglishMundoEspañolSpanish
Europe
DeutschlandDeutschGermanFranceFrançaisFrenchΕλλάδαΕλληνικάGreekItaliaItalianoItalianČeská republikaČeštinaCzechPolskaPolskiPolishСрбиjаСрпскиSerbianLatvijaLatviešuLatvianLietuvaLietuviųLithuanianMoldovaMoldoveneascăMoldavianБеларусьБеларускiBelarusian
Transcaucasia
ԱրմենիաՀայերենArmenianАҧсныАҧсышәалаAbkhazХуссар ИрыстонИронауОssetianსაქართველოქართულიGeorgianAzərbaycanАzərbaycancaAzerbaijani
Middle East
Sputnik عربيArabicArabicTürkiyeTürkçeTurkishSputnik ایرانPersianPersianSputnik افغانستانDariDari
Central Asia
ҚазақстанҚазақ тіліKazakhКыргызстанКыргызчаKyrgyzOʻzbekistonЎзбекчаUzbekТоҷикистонТоҷикӣTajik
East & Southeast Asia
Việt NamTiếng ViệtVietnamese日本日本語Japanese俄罗斯卫星通讯社中文（简体）Chinese (simplified)俄罗斯卫星通讯社中文（繁体）Chinese (traditional)
South America
BrasilPortuguêsPortuguese
NewsfeedBreaking
12:21 GMTUN Chief Warns 'Humanity Unacceptably Close to Nuclear Annihilation'
12:09 GMTKremlin Says It Hopes for Consistency on Minsk Agreements From Germany After Merkel Leaves
12:02 GMTRussian Presidential Spokesman Says Gazprom Fulfilling All Obligations
11:54 GMTLabour Leader Says it’s ‘Not Right’ to Say Only Women Have a Cervix
11:43 GMT'F**k Them': Carlson Responds to Yet Another Call to Fire Him Over 'Great Replacement' Theory
11:42 GMT'Piece of Scum': UK Labour Deputy Leader Lashes Out at Tories
11:14 GMTUK Transport Minister Calls on Britons to Behave Normally, Says There is No Shortage of Fuel
11:12 GMTHamas Has No Place in Sudan But Will It Give Up on Former 'Base'?
11:05 GMTJapan Should Look Into Having Nuclear Submarines, Candidate for Ruling Party Head Says
11:05 GMTIsraeli Soldiers Shoot Down Nazi Flag Raised Near Outpost in West Bank - Photo, Video
10:52 GMTTaiwan Strait Situation 'Complex and Grim', Xi Jinping Says as He Calls for 'National Reunification'
10:46 GMTHillary Clinton Urges to Call Her 'Madam Chancellor', But Netizens Come Up With Other Names
10:39 GMTGerman Green Party Might Find Some 'Rare Lizards' to Stop Nord Stream 2, AfD Co-Chair Warns
10:35 GMTWorld War II Bomb Suspends Elections at Several Polling Stations in Wuppertal, Germany
09:47 GMTTunisian Lawmaker Says Ennahda Party's Rigidity Led to Mass Resignation of Members
09:41 GMTCanary Island Volcano Continues to Erupt, Forcing More People to Evacuate
09:41 GMTChina Sells Almost $65Mln Worth of Carbon Dioxide Emission Quotas, Environment Ministry Says
09:28 GMTIRGC Commander Says 'US Hand-Made Armies' Failed to Tackle Terrorists in Afghanistan, Iraq
09:21 GMTKate’s 'Coolness' and William’s 'Bullying' Led to Rift With Harry and Meghan, Book Claims
08:21 GMTIndia’s Main Opposition Party Takes a Dig at Grand Celebration on PM Modi’s Return From US