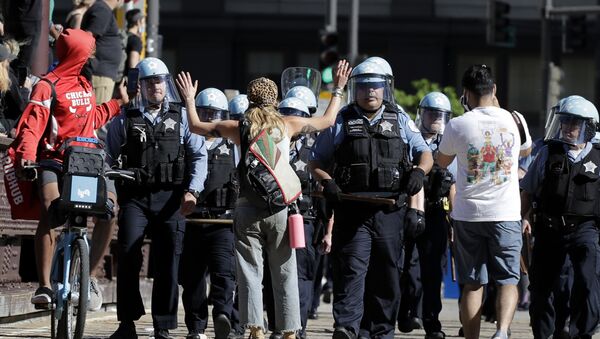 © AP Photo / Nam Y. Huh
Subscribe
International
India
Africa
While some netizens bashed the social media personality over her conduct at the protest, there were also those who seemed to direct their ire at influencers in general.

A social media influencer named Kris Schatzel has ended up facing backlash after she attended one of the protests, which erupted across the United States in the wake of the death of an African American man named George Floyd, while accompanied by her photographer Mila Voyna in order to perform what the Daily Mirror described as a "full-on photoshoot" there.

As a short video featuring Schatzel posing for a photo as protesters march by has quickly evoked a barrage of criticism directed at her, with some arguing that people shouldn't treat protests “like Coachella”.

A number of people also seemed to direct their ire at influencers as a whole.

can we please cancel influencers? the money companies give to them for posts can be dispersed for the cause at hand. 🤦🏻‍♀️

Good God I wish influencers would go extinct. I know it would mean an end to this excellent Twitter account but....

Comment sections of at least some of Kris' YouTube videos also got flooded with negative comments from people who didn't seem thrilled with her conduct at the protest.

According to Dazed magazine, prior to turning her Instagram account private, Schatzel responded to the criticism with the following statement: "I truly believe this level on (sic) intolerance and hateful comments are detrimental to the movement and what we are all trying to achieve for black and brown communities. I hope we can all we can all focus on the true cause as to why we are all here."