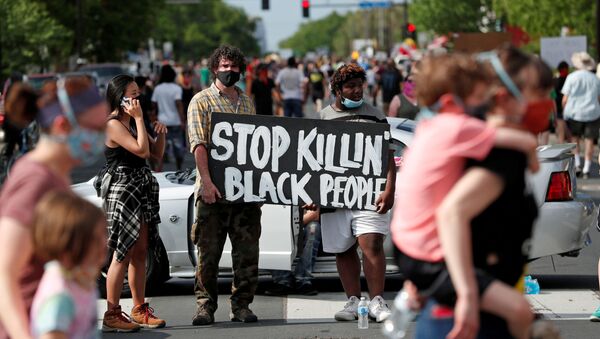 Tommy Sheridan
All materials
George Floyd called out for his mother as he gasped for air in the final minutes of his life.

Lying face down on the ground with his hands handcuffed behind him George posed no threat to anyone but was restrained by three Minneapolis police officers kneeling on him and one of those brutes placed his knee deliberately and sadistically onto George’s neck.

George Floyd’s muffled and fear laden cries of ‘I can’t breathe’ were ignored by the four police officers who surrounded him. He died on May 25th but the agonised calls for his mother before he drew his last breath have been heard by black mothers across America and human beings with a heart across the world.

Make no mistake about it, George Floyd was murdered. He was an unarmed black man presenting no threat to anyone when he was hauled to the ground by law enforcement officers who are employed to ‘Protect and Serve’ the community. They were called by a grocery store to investigate an allegation that a forged $20 bill was used to buy cigarettes. The Cup Foods grocery store owner described George as a regular and friendly customer.

Watch the video footage of George’s detention for yourself and see with your own eyes the extent of systemic and chronic racism which pollutes America today and is particularly prevalent within the police forces across the United States. This is how the police deal with an unarmed black man suspected of a minor crime in broad daylight.

this video isnt being spread enough. he had handcuffs on and 2 more police officers holding him, chauvin had NO reason to keep his knee on his neck. #RaiseTheDegree pic.twitter.com/1xjxP0tzrZ

​Officer Chauvin Must Be Charged With First Degree Murder

The thug who placed his knee on George Floyd’s neck should be charged with First Degree murder but the other officers participated in this crime and must face charges of complicity and failing in their sworn duties to prevent a serious crime being committed. I’ve signed the online petition for First degree murder charges against Derek M. Chauvin. Why don’t you? Familiarise yourself with the background of bully boy thug Chauvin.

For the last six days America has been rocked by protests and expressions of rage that such incidents of racist police brutality are still a daily occurrence across this deeply divided country. Many in power and within the media will try and concentrate on examples of fire raising and looting in an attempt to shift the focus away from why hundreds of thousands have taken to the streets in almost all of America’s fifty states toward condemnation of the nature of the protests. The nature of the protests is a mere footnote to the very substance of why people are protesting.

Thousands of ordinary black Americans hold aloft placards which proclaim, ‘Black Lives Matter’ and ‘I Can’t Breathe’ in solidarity with George Floyd. Tens of thousands white American citizens join those protests holding aloft ‘Your Fight Is My Fight’ placards. Only those with hearts of stone are not now filled with sorrow that an innocent black man has lost his life so brutally and unnecessarily at the hands of individuals who are supposed to ‘protect’ not kill defenceless human beings.

America Was Built on Violence, White Supremacy and Racism

America is a society and country built on the poison and bile of racism, white supremacy and violence. Slavery underpinned its early economic development while the violent extermination of the Native American communities marked the beginning of its white supremacy history. The struggle for black civil rights has been long, violent and bloody but it is a journey which is far from over.

George Floyd Protests: How US Presidents Have Dealt With Race Riots Over the Years
The ‘I Can’t Breathe’ placards are not new. The name Eric Garner may not be familiar in white American households but in black communities his death in July of 2014 sparked outrage and solidified the ‘Black Lives Matter’ organisation as a primary and necessary force in modern America.

Eric was accused of selling unlicensed single cigarettes in New York’s Staten Island borough and wrestled to the ground by several New York police officers. One of those officers placed him in a choke hold and despite Garner frantically repeating ‘I can’t breathe’ eleven times the officer did not release the handcuffed man who was prostrate on the ground until his body became limp.

Eric Garner was an unarmed father of six children and grandfather of three. He posed no threat to anyone. His only ‘crime’ was the colour of his skin. He was murdered by a white police officer.

Incredibly that white police officer Daniel Pantaleo escaped criminal indictment by a local Richmond County grand jury in December of 2014 even though the Medical Examiner ruled Garner's death a homicide. According to the medical examiner's definition, a homicide is a death caused by the intentional actions of another person or persons. So, Eric Garner was killed by the intentional actions of another person but apparently not the one who held him in a choke hold while he was lying face down handcuffed until he breathed no more.

The fact the Department of Justice in America declined to bring Federal charges against this officer for a racially motivated killing rubbed corrosive salt in an already gaping wound. The officer concerned had several complaints of police brutality against his name before the Garner execution, but he did not face an internal police tribunal until August 2019. An administrative judge recommended he be fired. He was. On 19th August 2019. Over five years after being responsible for the death of Eric Garner.

Six years on from unarmed Eric Garner’s police slaying and the fatal shooting and murder of unarmed eighteen-year-old Michael Brown we have George Floyd.

An analysis of the deaths of unarmed black men and women at the hands of police officers over the last decade alone reveals a putrid and vile record of police brutality fuelled by racism and hate. To mention all the names and incidents would turn this column into a book and still fail to do justice to the individuals and families who have suffered. The uniform of the rancid KKK is white cloaks and hats. Under such cover they carried out lynching and murders of black citizens with impunity. Nowadays a police uniform is enough to allow such savagery. The ropes and sycamore trees have been dispensed with as police badges, legal firearms and choking now facilitate the same outcome.

If you are under any doubt as to the extent of police racism across America I invite you to visit the website of Mapping Police Violence.

There you will find statistics and facts which should explain in block capitals why so many are now protesting across America just now and put into shade the secondary narrative of riots and looting. When whole communities are discriminated against, systematically abused and brutalised and then ignored, rioting, looting and fire raising is the least I would expect and I refuse to condemn those involved in uprisings against injustice while the perpetrators of injustice remain untouched.

Black people in America are three times more likely to be killed by police than white people. Black people are less likely to be armed than white people. In eight of the largest US police departments in America the police murder rate of black men is higher than the murder rate across all of America. The statistics illustrate that police violence against blacks bears absolutely no relation to the levels of violent crime within precincts. Most telling perhaps of all the statistics is the fact that in 99% of all the police killings between 2013-2019 not a single police officer has been charged with a crime.

Alexandria Ocasio-Cortez is a Spanish American politician serving as the US Representative for New York's 14th congressional district. She is a declared socialist member of the Democratic Party and last year she expertly called out the root cancer of white supremacy which pollutes America when she highlighted how murders perpetrated by white supremacists are never designated as domestic terrorism in contrast to murders committed by Muslims or black Americans. White American mass murders of blacks and Jews are never designated domestic terrorism as they are interpreted as white men invoking their white supremacy. They are subsequently condemned as lunatics and mental health sufferers but not terrorists. A fact touching on the institutional attitudes to white on black violence.

President Trump’s reaction to the George Floyd murder and subsequent protests has been classic Trump. Without class, compassion, integrity or intelligence. Even Twitter has been compelled to step in and label his Tweets as inconsistent with their community rules. Twitter labelled a tweet by the president on late Thursday evening as “glorifying violence” after Mr Trump denounced protesters in Minneapolis who he claimed were acting violently. In two tweets, the president called the protesters “thugs” before stating that “when the looting starts, the shooting starts”. Outrage quickly mounted following the tweets, as people expressed concerns the president’s words could further incite violence instead of helping to defuse the situation.

No one should be surprised. Donald Trump’s racist attitudes and actions are a matter of record and the fact this man has declared his intention to designate the Anti-Fascist Action campaign in America, Antifa, a terrorist organisation displays to the world his racism, ignorance and inability to even understand his own power as it is not within his gift to apply such a designation via Presidential announcement.

What it does do is signal clearly to his racist white base that organisations like the KKK which preach, and practice violence will not be condemned but those seeking to defend black communities from violence will be condemned. Despite the fact Antifa has no record of violence to its name, a point well noted by CNN:

"It also begs the question why analogous extremist right wing groups are not similarly designated by the Trump administration, since violent right-wing extremists in the US kill far more Americans than leftist terrorists. According to data gathered by New America, a research institution, since 9/11 right-wing terrorists in the United States have killed 110 people for political reasons, while Antifa supporters have killed exactly no one for political reasons".

After Week of Angry Protests Over George Floyd's Murder, Human Rights Watch's Website Remains Silent
America had huge problems with racial inequality, systematic discrimination against black Americans and deep rooted and obscene levels of poverty cheek by jowl with incredible wealth long before Trump walked into the White House. In fact, Trump is a result of politicians ignoring all those problems for decades. His most successful selling point in 2016 was the fact he was not a politician. However, while in office Trump has deliberately fanned the flames of racism and promoted the politics of division and intolerance in an attempt to shore up his perceived political base. His gross inadequacies were clear for many to see prior to the Covid19 crisis but that exposed him as a clown in a suit. This current wave of protest against institutional and chronic racism will hopefully sweep him from the Oval office come November.

America 2020 is a country where being anti-racist means you are labelled a terrorist while being racist qualifies you for being President. That situation cannot continue much longer.

Joe Biden is little better than Trump on the big economic and international issues and he comes from the same stream of white privilege. Bernie Sanders would have been a perfect anti-dote to Trump’s hatred and protection of the rich. Biden is a much weaker alternative. However, triumph for Trump again in November’s Presidential elections will, in my opinion, spark a wildfire of protest that could result in the most serious divisions in the US since their 1861-65 civil war. Either real change happens, or America will explode.