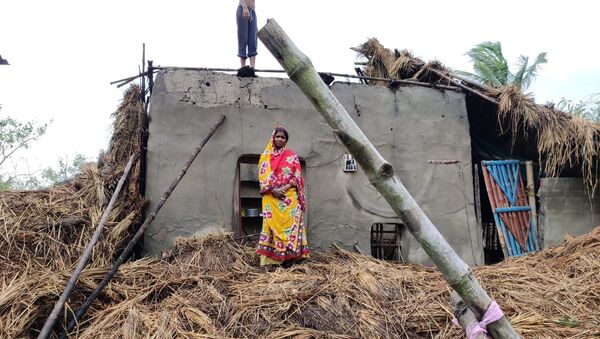 © Sputnik
Subscribe
International
India
Africa
New Delhi (Sputnik): Earlier this month, cyclone Amphan hit eastern coastal states like West Bengal and Odisha claiming around 100 lives and affecting over 10 million people. It is estimated that around $14 billion in damages were caused by the storm.

The western Indian states of Maharashtra and Gujarat are likely to face a heavy rainstorm in the next 48 hours the Indian Meteorological Department (IMD) said on Sunday, noting that a low pressure area has formed over the Arabian Sea. Cyclonic storm “Nisarga” will reach the coasts of northern Maharashtra and southern Gujarat around the morning of 3 June, according to them.

“We are expecting the rapid intensification of the cyclone, once formed because sea surface temperature is high, wind shear is low and ocean heat potential is also high. We want the state governments to be alert", Sunita Devi, in charge of cyclones at IMD said.

IMD will release the intensity of the cyclone later as it is still reading the developments. Meanwhile, the National Disaster Response Force (NDRF) has been scrambled to different parts of Maharashtra in anticipation of the cyclone. Besides the deployment of six units of NDRF, three teams are already on standby in Mumbai.

Authorities have also issued a stern warning to fishermen and advised them not to venture into the southeast Arabian Sea, Lakshadweep area and along the Kerala coast until 3 June.

These back-to-back disasters have brought fourth biblical comparisons and forced people to think about the next crisis. Delhi witnessed temperatures of 47.6 degrees Celsius earlier this week, marking the warmest May in 18 years, while eastern India is struggling to revive from a massive loss due to a super cyclone on 20 May. The northern Indian states have, meanwhile, faced an unprecedented wave of locusts, leaving destruction in their wake.

A cyclone is the last thing that Gujarat and Maharashtra need now. https://t.co/WoB1NTbmLC

It's pretty much like if you survive level 2020 you are gonna be fuckin' immortal...!!!

​Some users launched online polls asking others to predict 2020's next crisis.

This is what the almighty is trying to warn us through....covid-19, freq earthquakes, violent cyclones, climate change and every insane thing we could ever imagine. Its 2020! Wake up planet people. And I guess we'll let the world end like that?