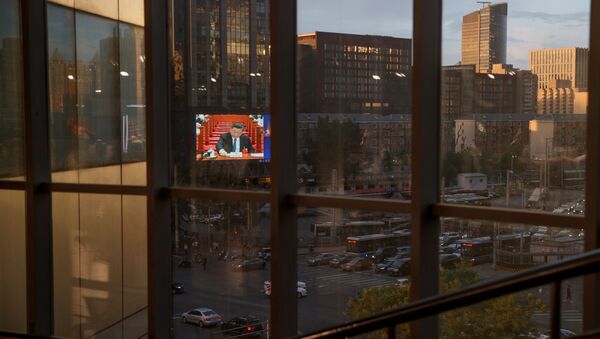 © REUTERS / THOMAS PETER
Subscribe
The new security legislation for Hong Kong has made it a crime for citizens to undermine Beijing’s authority in the territory. It could also see China installing its own security agencies in the region for the first time.

The UK has joined Australia, Canada and the US in criticising China’s decision to impose a new national security law on Hong Kong.

In a joint statement Foreign Secretary Dominic Raab and ministers from the three other countries said; “China’s decision to impose the new national security law on Hong Kong lies in direct conflict with its international obligations under the principles of the legally-binding, UN-registered Sino-British Joint Declaration.”

​“The proposed law would undermine the One Country, Two Systems framework. It also raises the prospect of prosecution in Hong Kong for political crimes, and undermines existing commitments to protect the rights of Hong Kong people.”

The statement also voiced concerns that the legislation “will exacerbate the existing deep divisions in Hong Kong society.”

The four nations have called on the Chinese government to work with the Hong Kong SAR government and the people of Hong Kong to “find a mutually acceptable accommodation that will honour China's international obligations under the UN-filed Sino-British Joint Declaration.”

Dominic Raab also said, “the UK will extend visa rights for as many as 300,000 Hong Kong British national (overseas) passport holders if China continues down the path of imposing repressive security laws on the former British colony.”

Raab stressed the offer was dependent on the precise next steps China seeks to take to impose its security laws.

Protests broke out in Hong Kong on Wednesday after the parliament discussed a different law which would make it a crime to disrespect the Chinese national anthem. Hundreds of people were arrested in protests over that and the security law, as reported by the BBC.

The new security law which makes it a crime for Hong Kong citizen’s to challenge Beijing’s authority in the territory, means Hong Kong can no longer have “a high level of autonomy” from mainland China.

China’s treatment of Hong Kong has further fuelled tensions between the US and China. Relations between the two countries have been tense over China’s claims in the South China Sea and trade, with the coronavirus pandemic adding to the acrimony.

China will take "strong countermeasures" if Washington continues to intervene in the country's internal affairs, the Office of the Chinese Foreign Ministry's Commissioner in Hong Kong said in on Thursday in response to US Secretary of State Mike Pompeo's statement suggesting that a new Hong Kong security bill undermines the administrative region's autonomy from China.

Pompeo said on Wednesday he had certified to Congress that Hong Kong did not warrant the same treatment in accordance with US laws applied to the territory before 1997. The state secretary said he made the determination in light of China's efforts to impose national security legislation in Hong Kong.

"The spokesperson emphasized that Hong Kong is part of China and its affairs are China's internal affairs. China is rock-firm in implementing 'One Country, Two Systems' and enacting national security legislation for Hong Kong. We urge the US side to abide by international law and basic norms governing international relations, and immediately stop meddling with Hong Kong affairs and China's internal affairs as a whole. Otherwise, it would only meet with firm opposition and strong countermeasures from the 1.4 billion Chinese people, including our Hong Kong compatriots," the statement read.

China says the legislation will aim to tackle secession, subversion, terrorism and foreign interference in the city, but critics fear it could lead to Hong Kongers being prosecuted - even retroactively - for criticising their or the mainland's leadership, joining protests or exercising their current rights under local laws, cited in the BBC.

000000
Popular comments
Crush them, China. As a British colony they had no rights but they want more rights now than the china proper citizens have. F@*! them!

Kremnil
28 May 2020, 19:42 GMT3
000000
When Hong Kong is occupied by foreign agents to create chaos against China, the latter has to react to and intervene in these Western created uprisings. Hope they detain them all, put them on the Titanic, since PM Johnson have recommended they migrate to the UK, and PEACE will settle in thereafter.
Normpich
28 May 2020, 19:44 GMT5
000000
Newsfeed
0
New firstOld first
loader
LIVE
Заголовок открываемого материала
Access to the chat has been blocked for violating the rules . You will be able to participate again through:∞. If you do not agree with the blocking, please use the feedback form
The discussion is closed. You can participate in the discussion within 24 hours after the publication of the article.
To participate in the discussion
log in or register
loader
Chats
Заголовок открываемого материала
Worldwide
InternationalEnglishEnglishMundoEspañolSpanish
Europe
DeutschlandDeutschGermanFranceFrançaisFrenchΕλλάδαΕλληνικάGreekItaliaItalianoItalianČeská republikaČeštinaCzechPolskaPolskiPolishСрбиjаСрпскиSerbianLatvijaLatviešuLatvianLietuvaLietuviųLithuanianMoldovaMoldoveneascăMoldavianБеларусьБеларускiBelarusian
Transcaucasia
ԱրմենիաՀայերենArmenianАҧсныАҧсышәалаAbkhazХуссар ИрыстонИронауОssetianსაქართველოქართულიGeorgianAzərbaycanАzərbaycancaAzerbaijani
Middle East
Sputnik عربيArabicArabicTürkiyeTürkçeTurkishSputnik ایرانPersianPersianSputnik افغانستانDariDari
Central Asia
ҚазақстанҚазақ тіліKazakhКыргызстанКыргызчаKyrgyzOʻzbekistonЎзбекчаUzbekТоҷикистонТоҷикӣTajik
East & Southeast Asia
Việt NamTiếng ViệtVietnamese日本日本語Japanese中国中文Chinese
South America
BrasilPortuguêsPortuguese
NewsfeedBreaking
03:42 GMTChina May Have the Edge in the Final Frontier With its Satellite-Crushing Weapon
01:50 GMTCongress to Get Tough on Armed Services After 2,000 Military Firearms Stolen During the 2010s
01:21 GMTOld Habits: Big Tobacco's Annual Cigarette Sales Increase for the First Time 20 Years, FTC Reports
01:00 GMTBlinken Speaks to Sudan Prime Minister, Welcomes His Release - State Dept.
YesterdayChina Pushes Vaccination Program Ahead as Lanzhou Placed in Lockdown to Contain New Covid Cases
YesterdayAre Manchester United and Antonio Conte a Good Fit?
YesterdayAngry Emojis Only!
YesterdayThe Spice Must Flow: ‘Dune’ Sequel Greenlit After Successful Opening Weekend at US Box Office
YesterdayRightwing Chilean Newspaper Sparks Outrage after Tribute Article to Hermann Goring
YesterdayUS Intelligence Unit Seeks Way to Detect Radio Signals That Indicate Data Breaches
YesterdayUS Senate Confirms Ex-Republican Senator to Be Next Ambassador to Turkey
YesterdayUnited Airlines Pilots, Workers Refusing to Fly With Unvaccinated Colleagues, Court Docs Reveal
YesterdayEx-Lehman Brothers Exec Predicts 3 More Years of Inflation, Tech Stocks to 'Get Crushed'
YesterdayBacking for Increased US Police Budgets Surges to 47% Amid Rise in Violent Crime – Poll
YesterdayAt Least 6 Killed, 10 Injured in Attack by IS Militants in Eastern Iraq - Source
YesterdaySection of Biden's Infrastructure Bill for Fighting Climate Change Reportedly Tops $500 Billion
YesterdayManchester United Hierarchy Reportedly Split on Ole Gunnar Solskjaer’s Future
YesterdayTexas Becomes Latest US State to Pass Anti-LGBTQ Law, Banning Trans Girls From Female Sports
YesterdayLe Pen Says Hungary's Orban Backs Launch of Hard-Right Alliance in Coming Months
YesterdayInvestors George Soros, Reid Hoffman Help Launch Group to Combat Online Disinformation