'Ice Skating to the Beach of Normandy': Biden Slammed Online as He Places 'D-Day' in December 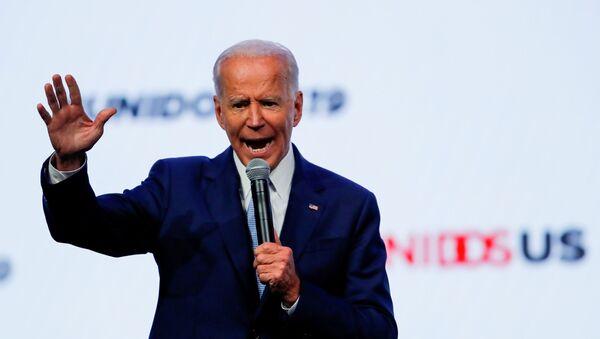 © REUTERS / Mike Blake
Subscribe
International
India
Africa
Biden's campaign staff reportedly insisted that the senator was referring to the so called “Delaware Day” which marks the date when the state ratified the Federal Constitution.

US Democratic senator and presidential hopeful Joe Biden has ended up getting quite a bit of criticism online after he seemed to have mixed up two prominent dates related to World War II, during a recent livestream with Pennsylvania Governor Tom Wolf.

As Biden and Wolf conversed, the former mentioned that his home state of Delaware "declared our independence on December the 7th, by the way. And it's not just D-Day."

While it wasn't immediately clear what event Biden was talking about, "D-Day" is often used as a reference to the World War II Allied landing operation in Normandy in 1944, which took place on 6 June, while 7 December is the anniversary of the Imperial Japan's forces attack on Pearl Harbor in 1941 – another landmark WWII date; also, Delaware declared its independence on 15 June, 1776.

All of this is wrong:

▶️Delaware declared its independence on June 15, not December 7 (the date it ratified the Constitution)

▶️ D-Day was June 6, not December 7 (that's the date of the attack on Pearl Harbor) pic.twitter.com/OI5oneBOo4

​Fox News, however, notes that Biden's campaign told them that the senator was actually referring to a so called "Delaware Day".

"Since 1933, the governors of Delaware have proclaimed December 7 as Delaware Day in honor of that day in 1787, when Delaware became the first state to ratify the Federal Constitution, thus making Delaware the first state in the New Nation", the campaign said, though the media outlet points out that "the state website's page about Delaware Day makes no mention of the anniversary being referred to as "D-Day."

Many social media users seemed less than thrilled with Biden's remark, some of them making rather unflattering suggestions about his alleged state of mental health...

Joe is not playing with a full deck of cards

Hes senile. Give him a break.

​...while a number of people cracked WWII-related jokes.

Was it over when the Germans bombed Pearl Harbor?

I remember how they ice skated to the beach of Normandy