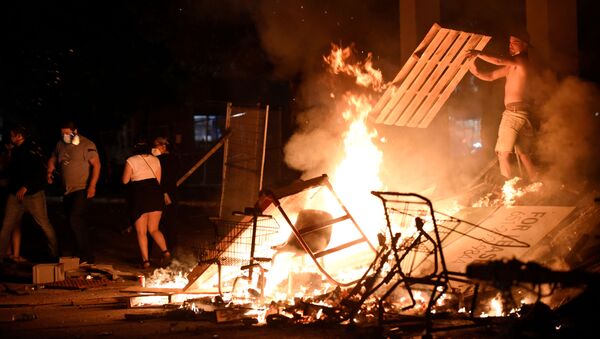 Los Angeles-style riots engulfed Minneapolis this week after the death of an unarmed black man in police custody. The four police officers involved in the detention have been fired, but the man's family and the city mayor have called for charges to be brought against the officer who kneeled on the man's neck before he lost consciousness.

An outpouring of anger over the death of George Floyd has led to clashes with police in Minneapolis on Wednesday, as well as the looting of stores and a deadly shooting.

Thousands of protesters gathered for the second night in a row at the intersection where Floyd was brutally pinned down on Monday.

The protest descended into widespread looting throughout the area. Footage emerged of vigilantes cleaning out a Target store, with some using hammers to break safes.

Target is getting cleaned out pic.twitter.com/0OGSHY132k

This is awful out here. No police. Looting continues pic.twitter.com/087TpNWhPV

There was at least one fatality reported last night. Police said they are investigating the death of a man who is suspected to have been a looter shot by a pawn shop owner.

Protesters threw objects including water bottles and rocks at police and firefighters during a fire that was started at AutoZone. pic.twitter.com/Cxz2syBLSp

The vigilantes also set multiple fires on Wednesday night; the arsonists set fire to an AutoZone store across the street from a police precinct building and to barricades in the streets.

THE AUTOZONE, WENDYS AND TARGET ARE ON FIRE #BlackLivesMatter #JusticeForGeorgeFloyd #minneapolisriots pic.twitter.com/vUESxMVEYZ

​For the second consecutive night, officers used tear gas and rubber bullets to break up the protest.

A barricade on 26th Ave is burning pic.twitter.com/Rp077QrMYB

​The outrage was in response to the Monday death of a black man by the name of George Floyd. The 46-year-old was detained after a grocery store owner called the police on him for allegedly passing a fake $20 bill.

A city police officer, accompanied by three other cops, pinned Floyd to the ground and pressed his knee against the man's neck for about eight minutes until he was motionless. Floyd was pronounced dead while en route to the hospital. Police said that he had "physically resisted" the officers, although videos from the scene and eyewitness reports indicated that he was not resisting arrest and was unarmed.

All the four police officers have been fired, but the protesters, as well as Floyd's family, have demanded their arrest and prosecution. Minneapolis Mayor Jacob Frey has called for criminal charges to be pressed only against the officer who pinned Floyd down by the neck.

Jacob Frey condemned the violence and asked the governor to deploy the state National Guard to combat the riots.