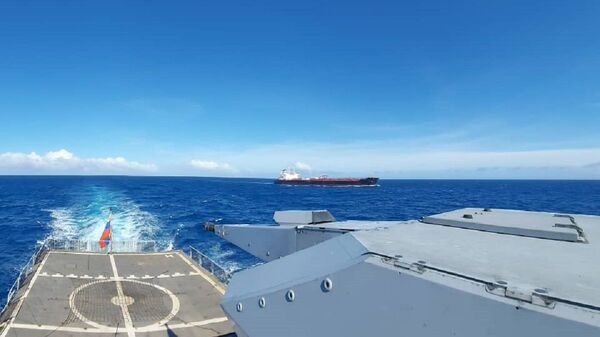 Ilya Tsukanov
All materialsWrite to the author
The tanker is one of five Venezuela-bound Iranian vessels making their way to the Latin American nation to ease a gasoline shortage caused by crippling US sanctions.

The Petunia is the third of five Iranian ships containing fuel supplies to reach the Latin American nation in recent days, and is said to contain nearly 50,000 tonnes of gasoline and related products designed to help the country cope with a domestic fuel crisis and kick start its oil refining capabilities.

#PETUNIA location on @MarineTraffic map:
She will arrives in next few hours for berth to El Palito port(probably).or drop anchor at anchorage area. pic.twitter.com/AJIxDyaHKs

Two more ships, the Faxon and Clavel, are continuing their journey across the Atlantic and are expected to reach Venezuela between May 27 and June 1.

The first of the five ships, the Fortune, arrived in the Venezuelan port of El Palito on Sunday, and was followed shortly after by the Forest, which docked at a port serving the Cardon refinery in the country’s west coast on Tuesday.

And four more tankers: the Forest, Clavel, Petunia, and Faxon are on their way. #IranYVenezuela pic.twitter.com/cwpYINCuAt

Despite possessing the largest proven oil reserves in the world and the capacity to refine some 1.3 million barrels of oil per day, Venezuela’s oil sector has been hit by crushing US sanctions and asset seizures, crippling production capacity and causing a deficit of gasoline across the country. Iran’s gas shipments are aimed at addressing the national shortages, as well has helping the state to recover some of its domestic fuel refining capacity. The country’s refining activities slipped to just 110,000 bpd in March, before recovering to about 215,000 bpd in May, but remain far below capacity.

The Iranian tankers set sail for Venezuela earlier this month, prompting the United States to begin tracking the vessels, and, reportedly, threatening to intercept them. Iran warned that any attempt to do so would constitute an “act of piracy,” and that Tehran would have “the right to take the necessary steps to counter [US] threats.”

Last week, US media reported that Washington was considering additional sanctions against both countries, while Venezuela’s envoy to the United Nations warned Secretary General Antonio Guterres of the threat of direct US military force against the ships. Iranian President Hassan Rouhani cautioned the US against making such a “mistake.”