‘I Can’t Breathe’: US Man Dies After Cop Kneels on His Neck, 4 Officers Fired - Graphic Video 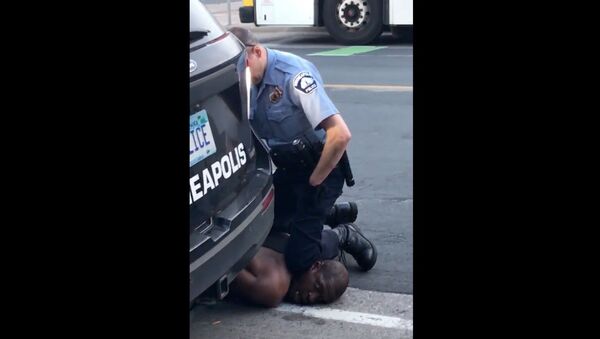 Newly surfaced cellphone footage has prompted Minnesota law enforcement officials and the FBI to initiate an investigation into the Monday night arrest that left local man George Floyd dead after an officer with the Minneapolis Police Department refused to remove his knee from Floyd’s neck. Four officers with the department have been fired.

The FBI’s involvement in the ongoing investigation was announced at a Tuesday news conference by Minneapolis Police Chief Medaria Arradondo, who told reporters that the agency was tapped to investigate possible civil rights violations, according to local news outlet Fox 9.

Video footage of the disturbing arrest, which was recorded by local resident Darnella Frazier, begins with two officers working to restrain Floyd while he is facedown on the street, next to a police SUV. A third officer is seen standing to the side, maintaining a clear area for police.

Officers came in contact with Floyd after dispatchers received a call regarding a man trying to use forged paperwork at a Cup Foods grocery store. An altercation with the officers reportedly broke out when Floyd resisted arrest, according to the department.

Although it’s not visible for the first 30 seconds of the video, the recording ultimately captures an unidentified officer willfully placing his left knee on the back of Floyd’s neck, despite multiple remarks from the arrestee that he is unable to breathe.

Warning: Video may not be appropriate for all viewers.

Floyd is later overheard saying that the cops are “gonna kill” him, as a group of locals begins to descend on the area, many of whom are quick to question the behavior exhibited by the cops. One individual repeatedly points out that the officer who is kneeling on Floyd is “trapping his breathing.”

“That’s bulls**t, bro. You’re stopping his breathing. You could get him off the ground. He’s enjoying that s**t,” the man continues. “[The officer is] enjoying that s**t … you know that’s bogus. He’s not even resisting arrest right now.”

The third officer that was seen standing to the side of the arrest earlier in the video remarks that since Floyd is able to talk, “he’s fine.” However, just a few short moments later, roughly at the four-minute timestamp, Floyd goes silent, and his body appears to go limp.

Video later shows a woman claiming to be associated with the local fire department come onto the scene and start questioning whether officers have checked Floyd’s pulse, which none of the officers appear to do.

“He’s not even f**king moving! Get off of his neck,” yells one person, as another chimes in, asking, “Did they f**king kill him?”

It’s not until an ambulance arrives on the scene that Floyd’s pulse is visibly checked by first responders. Floyd was eventually transported to the Hennepin County Medical Center, where he later died.

Though Arradondo steered away from addressing the video recording at the conference, the same could not be said for Minneapolis Mayor Jacob Frey, who described the events as being “wrong at every level.”

Frey further stated, “Being black in America should not be a death sentence,” adding that the officer who knelt on Floyd’s neck “failed in the most basic, human sense.”

During the conference, Arradondo told reporters that the initial two officers who responded to the scene were placed on “relieved of duty status,” which indicates that both cops are still being paid but are not assigned any law enforcement tasks. However, hours later, Frey revealed on social media that four officers involved in the fatal arrest were fired from the department.

In addition to the FBI, the Minnesota Bureau of Criminal Apprehension is also involved in the investigation. A release from the Minneapolis Police Department indicates that officers involved in the arrest did have body cameras; however, it’s unclear when the footage may be released.